Science Illustration. a Visual Exploration of Knowledge from the 15th Century to Today (Hardcover) 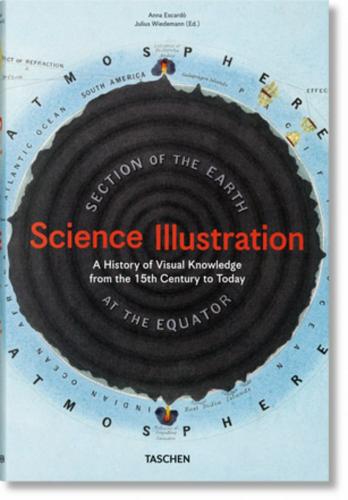 Science and illustration have always walked hand in hand, and not only the scientific community but the general public as well have used images since early history to understand natural phenomena. Moreover, from Galileo to Einstein, our modern history has been written with the key support of art and with all the insights it contributes. This XL-sized book collects more than 300 graphic works that range from original sketches to technical drawings, and from meticulous hand illustrations to computer-generated images.

The Western scientific revolution that started in the 14th century catapulted humankind into a completely new way of understanding how nature and the world around us behaved. Whether it was diseases caused by viruses or the vast galaxies of the cosmos, a new army of professionals turned their minds to unlocking and reshaping the universe of our experience with a dialectic positioned between theory and evidence. The field of illustration and the development of knowledge became inseparably intertwined, as can be seen by the majestic works shown in this book that were produced by the scientists and artists who specialized in this combined field.

Explore here the work of more than 700 scientists and over 300 discoveries in anatomy, physics, chemistry, astronomy, mechanics, and many other scientific fields, through the visual works that bring them to life. Combined with detailed texts explaining their scientific significance, the illustrations in this book introduce the work of such pionieering scientists as Andreas Vesalius, Isaac Newton, Marie Curie, and Rosalind Franklin. The visualizations themselves present game-changing ideas and discoveries from the 15th century to the present day, notably including Galileo's watercolors of the moon, Bourgery's unparalleled Atlas of Human Anatomy and Surgery, Florence Nightingale's statistical diagrams to indicate war casualties, and Einstein's quickly scribbled ideas for his general theory of relativity.

Many discoveries in science take place as the result of counterintuitive thinking, and in order to visualize their work scientists have to connect with the resources of collective knowledge and in turn convey new information back to people. This book is for everyone who is continually amazed by the wonders of our world and who wants to find out more about it through the remarkable illustrations used to present advances in scientific understanding.