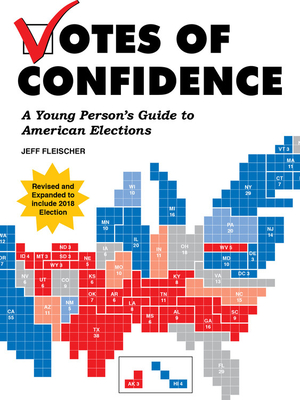 Every four years, coverage of the presidential election turns more into a horse-race story about who’s leading the polls and who said what when. Younger readers, who might be old enough to remember only one or two other elections, aren’t provided with much information about how the election process actually works, why it matters, or how they can become involved. With civics education becoming less common in schools, it’s important for teens to know what’s going on. With the 2016 election behind us and the upcoming 2018 mid-term election just around the corner, Votes of Confidence will be a timely resource that can generate news coverage, while written in an evergreen way that can remain relevant after the next president is chosen. Using a fun, casual voice and interesting sidebars and anecdotes that tell stories rather than just list facts, this book will provide teachers with a supplemental resource and readers with an engaging way to better understand their government.

“A timely primer on the American electoral process . . .  Many adults are poorly informed about the political system. . . This book would be a perfect refresher course, then, but should also be required reading for sixteen- to eighteen-year-olds as they prepare to vote for the first time. Fleischer covers a huge amount of information, but in such an orderly and lucid manner that it never feels overwhelming.”
- Foreword

“This book is a timely addition to educate new and prospective voters and it is not so specific to render it obsolete after the 2016 election cycle. . . [A]n excellent supplement to a civics class.”
- School Library Journal

“This is certainly a timely book to be released during the election year.  And given the high amount of interest in the candidates, with their behavior garnering so much attention, what a great way to use it to advantage and not only get young readers interested in politics, but explain to them, on their level, how it works – and why it’s in place to start with. “
- Dew on the Kudzu

“In a particularly winning voice, abetted by numerous intriguing anecdotes and trivia. . . Fleischer’s primer tenders a wealth of insight in a generous and welcoming manner.”
- Kirkus Reviews (starred review)

“Fleischer’s well-contextualized, nonpartisan approach results in a valuable resource for readers looking to understand and become involved in a complicated system while avoiding spin.”
- Publishers Weekly

“[Fleischer] takes on the challenge of explaining the election cycle to secondary students and deserves a 21-gun salute for his cogent and readable exposition. . . With clarity, succinctness, and a bit of ironic wit, this book is a definite first choice for high school and public libraries, for young people approaching voting age and for adults (e.g., those who can’t name the three branches of federal government and the balance of powers that it provides to keep us going) to read almost everything you need to know before you vote!”
- Books For Kids

“Votes of Confidence provides the whole package, working as a one-stop source not only for the election process but also the American government as a whole. . . [A] great addition to all libraries and will appeal to teens and adults as well. In a presidential election year, this is a timely resource.”
- VOYA