Slow Train to Guantanamo: A Rail Odyssey Through Cuba in the Last Days of the Castros (Paperback) 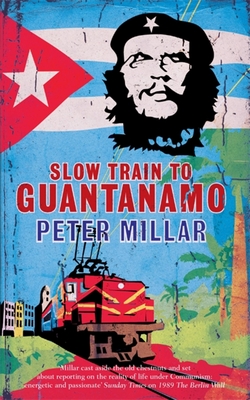 By Peter Millar
Not Available from Us

In this rambling odyssey set in the later days of the Castro regime, Peter Millar jumps on board the Cuban railway system, once the pride of Latin America. Starting in the ramshackle but romantic capital of Havana, he travels with ordinary Cubans, sharing anecdotes, life stories, and political opinions. Millar may not have all the answers but he asks a lot of the right questions on an anarchic, entertaining, and often comic adventure. A journey everyone will want to read about but nobody in their right mind would want to emulate A] charming, witty, but sometimes sad memoir that offers a portrait of a nation on the cusp of enormous change. . . An enjoyable, informative glimpse at a Cuba seldom seen by Americans.--Booklist Sept. 15, 2013.

Peter Millar was born in Northern Ireland and educated at Magdalen College, Oxford, where he read French and Russian. He worked for Reuters news agency as the sole non-German correspondent in East Berlin in the early 1980s, also covering the Solidarity movement in Poland before moving to Warsaw, where he pressed the button to tell the world of the election of Mikhail Gorbachev, a defining moment in Soviet history. In 1985 he joined the Sunday Telegraph in the newly created role as Central Europe Correspondent - a title he invented to anticipate the dramatic changes about to overtake the continent - before moving to The Sunday Times, in early 1989, just in time to catch the climactic final stages of The Cold War. Millar was seized by the Volkspolizei on the streets of East Berlin during the demonstrations which accompanied Gorbachev's visit in October, interrogated by the Stasi and expelled from the country. Nonetheless he managed to get back by November 9, the dramatic night the Berlin Wall came down. These events form the background to his 2009 autobiographical book: 1989, The Berlin Wall (My Part in its Downfall), a title he freely admits much to the late Spike Milligan. He is a firm believer that there is humour (if occasionally dark) behind even the greatest historical events. In the 1990s Millar worked briefly with Robert Maxwell, as deputy editor of his ill-fated newspaper The European, a role he has since described as like being aide-de-camp to Stalin. For the past decade Millar has concentrated on books, with two thrillers to his name and a third - The Black Madona - due out in the autumn of 2010. He is also author of All Gone to Look for America, a travel book reflecting his love of trains, history and good beer, crisscrossing the United States in a 10,000 mile journey on the now little used railways that were instrumental in turning most of a continent into a single nation. He is married with two grown-up sons, divides his time between the north Oxfordshire brewing village of Hook Norton and South London where he can often be found (often in a state of chronic despair and with fingernails chewed to the bone) following the vicissitudes inflicted by fate on his beloved Charlton Athletic.