The History of South Carolina: Its European Discovery and Colonization, Battles with the Native Americans, the Revolutionary War of Independence, and (Paperback) 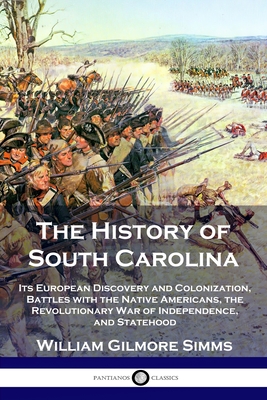 This formidable history of South Carolina stretches from the territory's discovery, through its earliest years, its nascence as a prospering colony, and finally its statehood in the United States of America.

Published in 1860, this history benefits from several sources and texts which are seldom drawn upon in modern history books. William Gilmore Simms was a politician and writer whose affiliation with the American South afforded him possession of documents gained from local connections. This is a history not merely interested in the broad strokes of conflicts with Native American and waves of settlements that defined colonial North America, but a meticulous record of anecdotes, lives and deeds sometimes scarcely remembered and almost lost to time.

Although fighting is the most recurrent theme of the history, Simms includes descriptions of life in South Carolina of old, describing how its towns and villages grew and prospered. We are given impressions of pioneer life, trades, the rugged wilderness, setbacks and struggles against hardship. Perhaps the most intense passages of the history recall the Revolutionary War, a conflict whose intensity outstripped the periodic wars with Native American tribes, which the author richly relates, his narrative imbued with official accounts and blow-by-blow anecdotes of skirmishes and heroisms.

In all, this history of South Carolina is unique, with valuable information little-seen in modern-day treatments of the state, its peoples and its achievements.