Texas History Stories: The Alamo, the Goliad Massacre, San Jacinto and Biographies of Sam Houston, David Crockett, Dick Dowling and Other Her (Paperback) 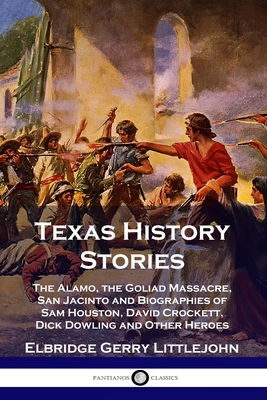 This collection of Texas stories includes the famous defense of the Alamo, great battles such as San Jacinto, plus biographies of famous people like Sam Houston and Dick Dowling.

An exciting and swiftly paced set of true stories, dramatic but factual, sobering for their truth yet romantic in their spirit. Texan history is one of human endeavor; from its time as a province of Spain, through to the famous battles with Mexico that eventually led to the establishment of the southern United States border. The pioneers, explorers and military men who helped establish the state of Texas receive biographies, telling of their greatest deeds and role as leaders. For years, Texas existed as an independent Republic, only joining the USA after years spent fending for itself.

Through these stories, historian and chronicler Elbridge Littlejohn builds a common identity for Texans. Daring and expansive, valiant and proud - Texas was built upon the bravery and passion of some of the finest souls in North America. A total of twenty-seven illustrations populate the pages, helping the reader to visualize the intense scenes described.