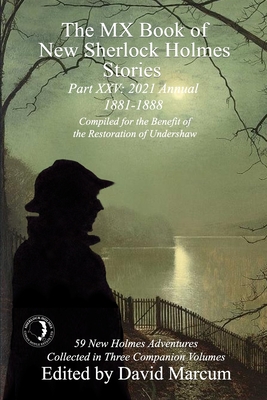 By David Marcum (Editor)
Email or call for price.
Available to Order
(Due to distributor limitations, sales of this book are final - it cannot be returned to us.)

This is book number 25 in the MX Book of New Sherlock Holmes Stories series.

Here, though the world explode, these two survive, And it is always eighteen-ninety-five.

So wrote Sherlockian Vincent Starrett in his 1942 poem 221b, soon after the United States entered World War II. Even as those years brought terrible challenges, so too has 2020 been a year of great testing for so many of us, as a global pandemic rages and good people are called to stand against evil.

For Sherlockians, comfort can be found in climbing those seventeen stairs to the Baker Street sitting room, where it is always eighteen-ninety-five - or a few decades on either side of it.

In 2015, the first three volumes of The MX Book of New Sherlock Holmes Stories arrived, containing over 60 stories in the true traditional Canonical manner. That was the largest collection of new Holmes stories ever assembled, and originally planned to be a one-time event. But readers wanted more, and the contributors had more stories from Watson's Tin Dispatch Box, so the fun continued. Now, with the release of Parts XXV, XXVI, and XXVII, the series has grown to nearly 600 new Holmes adventures by almost 200 contributors from around with world. Since the beginning, all contributor royalties go to the Stepping Stones School for special needs children at Undershaw, one of Sir Arthur Conan Doyle's former homes, and to date the project has raised over $75,000 for the school.

As has become the tradition, this new collection features Holmes and Watson carrying out their masterful investigations from the early days of their friendship in Baker Street to the post-War years during Holmes's retirement.

Join us as we return to Baker Street and discover more authentic adventures of Sherlock Holmes, described by the estimable Dr. Watson as "the best and wisest . . . whom I have ever known."

All author royalties from this collection are being donated by the writers for the benefit of the preservation of Undershaw, one of the former homes of Sir Arthur Conan Doyle.