Myths of the Asanas: Stories at the Heart of the Yoga Tradition (Hardcover) 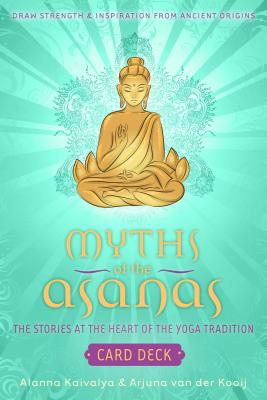 Enhance your yoga practice with this forty-five-card deck, which reveals the stories behind some of the most beloved poses.

Based on a best-selling book, Myths of the Asanas Card Deck is a practical and portable collection of the stories behind the yoga poses, just right to accompany you to classes and retreats. Practitioners around the world reap the physical benefits of yoga, assuming poses and frequently calling them by their Sanskrit names. While many know that hanumanasana is named for the deity Hanuman, few understand why this is the case. Behind each asana and its corresponding movements is an ancient story about a god, sage, or sacred animal, much like an Aesop fable or European folktale.


The myths behind yoga’s spiritual tradition have the power to help students of all levels realize their full potential. Meditating on the tolerance of trees while standing in tree pose can help one become more tolerant. Learning how the disfigured sage Astavakra came to be the teacher of a king can liberate us from anxieties about our external appearance and our self-imposed limitations. Marveling at Hanuman’s devotion to Ram can serve as a source of spiritual strength and determination. With beautiful illustrations to frame the stories, Myths of the Asanas Card Deck will add a new dimension to your practice and study of yoga.

Alanna Kaivalya, also known as "The JivaDiva," produces the JivaDiva Yoga Jam podcast, which has been heard by over a million people worldwide. In March 2008, Yoga Journal named Alanna one of the top twenty teachers under forty. She is a contributing writer to Yoga Journal, she regularly teaches at Yoga Journal conferences. She lives in New York City.

Arjuna van der Kooij holds an MA in cultural anthropology from the University of Amsterdam. Son of a pastor and student of the late B. P. Puri, he is a practitioner of Bhakti yoga. He divides his time between India and Amsterdam.