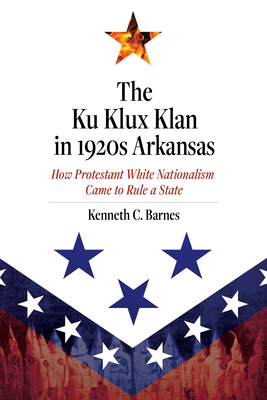 The Ku Klux Klan established a significant foothold in Arkansas in the 1920s, boasting more than 150 state chapters and tens of thousands of members at its zenith. Propelled by the prominence of state leaders such as Grand Dragon James Comer and head of Women of the KKK Robbie Gill Comer, the Klan established Little Rock as a seat of power second only to Atlanta. In The Ku Klux Klan in 1920s Arkansas, Kenneth C. Barnes traces this explosion of white nationalism and its impact on the state’s development.

Barnes shows that the Klan seemed to wield power everywhere in 1920s Arkansas. Klansmen led businesses and held elected offices and prominent roles in legal, medical, and religious institutions, while the women of the Klan supported rallies and charitable activities and planned social gatherings where cross burnings were regular occurrences. Inside their organization, Klan members bonded during picnic barbeques and parades and over shared religious traditions. Outside of it, they united to direct armed threats, merciless physical brutality, and torrents of hateful rhetoric against individuals who did not conform to their exclusionary vision.

By the mid-1920s, internal divisions, scandals, and an overzealous attempt to dominate local and state elections caused Arkansas’s Klan to fall apart nearly as quickly as it had risen. Yet as the organization dissolved and the formal trappings of its flamboyant presence receded, the attitudes the Klan embraced never fully disappeared. In documenting this history, Barnes shows how the Klan’s early success still casts a long shadow on the state to this day.

Kenneth C. Barnes is professor of history at the University of Central Arkansas. He is the author of Who Killed John Clayton?: Political Violence and the Emergence of the New South and Anti-Catholicism in Arkansas: How Politicians, the Press, the Klan, and Religious Leaders Imagined an Enemy, 1910–1960, winner of the J. G. Ragsdale Book Award in Arkansas History.

“Ken Barnes has skillfully produced a work that is accessible to a general audience and one that offers new insights for historians. An undeniable contribution to Arkansas and American history.”