Ruth Asawa: All Is Possible (Hardcover) 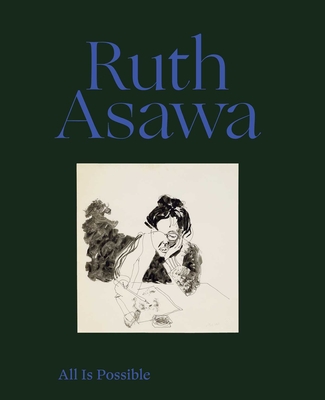 Known for her intricate and distinct artistic language, Asawa produced numerous sculptures, drawings, and prints that are built on simple, repeated gestures that accumulate into complex compositions. Her works on paper and “continuous” looped-wire sculptures suggest a field of fluctuating positive and negative forms, a means of reshaping how we perceive the world. Personal motifs reappear throughout in the most comprehensive look at the artist’s oeuvre to date––ceramic casts of faces of her family, friends, and neighbors; the carved front door Asawa and her family made for their home; and drawings of her children, grandchildren, and husband sleeping––all providing an expansive look into the artist’s life.

A document of the breathtaking and surprising exhibition Ruth Asawa: All Is Possible, organized by Helen Molesworth, this book records and expands upon the show, offering new insight from writers and curators with a selection of sixty-four works from Asawa’s spectacular oeuvre. With an introduction by Molesworth, this book features focused texts from Makeda Best, Taylor Davis, Ruth Erickson, Briony Fer, Jennifer L. Roberts, and John Yau.

Born in rural California, American artist, educator, and arts activist Ruth Asawa (1926–2013) was first exposed to professional artists while her family and other Japanese Americans were detained at Santa Anita, California, in 1942. Following her release from an internment camp in Rohwer, Arkansas, eighteen months later, she enrolled in 1943 in Milwaukee State Teachers College. Unable to receive her degree due to continued hostility against Japanese Americans, Asawa left Milwaukee in 1946 to study at Black Mountain College in North Carolina, then known for its progressive pedagogical methods and avant-garde aesthetic environment. Asawa’s time at Black Mountain proved formative in her development as an artist, and she was particularly influenced by her teachers Josef Albers, Buckminster Fuller, and the mathematician Max Dehn. She also met architectural student Albert Lanier, whom she would marry in 1949 and with whom she would raise a large family and build a career in San Francisco. Asawa continued to produce art steadily over the course of more than a half century, creating a cohesive body of sculptures and works on paper that, in their innovative use of material and form, deftly synthesizes a wide range of aesthetic preoccupations at the heart of twentieth-century abstraction.

Makeda Best is a curator, writer, and historian of American photography. Since 2016, she has served as the Richard L. Menschel Curator of Photography at the Harvard Art Museums. She holds a Ph.D. from Harvard University and a MFA in studio photography from CalArts.

Taylor Davis is a visual artist living in Boston. Davis has exhibited widely, with work included in the 2004 Whitney Biennial. Honors include a Rauschenberg Residency, a Radcliffe Fellowship, an Anonymous Was a Woman Award, and the ICA Boston Foster Prize. Davis is a professor at Massachusetts College of Art and Design and co-chair and faculty at the Milton Avery Graduate School of the Arts at Bard College.

Ruth Erickson is the Mannion Family Curator at the Institute of Contemporary Art, Boston, where she has curated more than a dozen exhibitions, including solo projects with the artists Kevin Beasley, Mark Dion, Wangechi Mutu, Tschabalala Self, and Vivian Suter, as well as traveling group exhibitions on Black Mountain College. She has edited and contributed to multiple exhibition catalogues, including Leap Before You Look: Black Mountain College 1933–1957, and has presented and published her work widely. She received an MA and Ph.D. in art history from the University of Pennsylvania and is a 2022 Center for Curatorial Leadership fellow.

Briony Fer is an art historian who has written extensively on modern and contemporary art. Her research interests have consistently moved between the history of the avant-gardes and the work of contemporary artists, including Gabriel Orozco, Roni Horn, Vija Celmins, and Tacita Dean. Her books include On Abstract Art (1997), The Infinite Line (2004), Eva Hesse: Studiowork (2009), and Gabriel Orozco: thinking in circles (2013). She cocurated the Anni Albers retrospective, with Maria Muller-Schareck and Ann Coxon, at Tate Modern and K20 Dusseldorf in 2018. She is a professor of the history of art at University College London and a fellow of the British Academy.

Helen Molesworth is a Los Angeles–based writer and curator. Her major museum exhibitions include One Day at a Time: Manny Farber and Termite Art, Leap Before You Look: Black Mountain College 1933–1957, and Work Ethic. She has organized monographic exhibitions of Ruth Asawa, Moyra Davey, Noah Davis, Louise Lawler, Kerry James Marshall, Catherine Opie, and Luc Tuymans among others. She is the author of numerous catalogue essays and her writing has appeared in Artforum, Art Journal, Documents, and October. The recipient of the 2011 Bard Center for Curatorial Studies Award for Curatorial Excellence, in 2021 she received a Guggenheim Fellowship and in 2022 she was awarded The Clark Art Writing Prize.

Jennifer L. Roberts is Elizabeth Cary Agassiz Professor of the Humanities at Harvard University. She is the author of numerous books and essays, including Mirror-Travels: Robert Smithson and History (2004), Jasper Johns/In Press: The Crosshatch Work and the Logic of Print (2012), and Transporting Visions: The Movement of Images in Early America (2014). In spring of 2021, she delivered the Seventieth Annual A. W. Mellon Lectures in the Fine Arts for the National Gallery of Art, with a series titled Contact: Art and the Pull of Print.

John Yau is an award-winning poet and art critic who has been publishing art criticism since 1978. He is a professor of critical studies at Mason Gross School of the Arts at Rutgers University. After writing for Art in America and Artforum, he served as the arts editor of The Brooklyn Rail from 2006 to 2011, and then began writing for Hyperallergic Weekend. He was the recipient of the 2018 Jackson Poetry Prize. In 2021, Yau was awarded the Rabkin Prize for excellence in visual arts journalism. His books of art criticism include In the Realm of Appearances: The Art of Andy Warhol and A Thing Among Things: The Art of Jasper Johns, as well as monographs on Wifredo Lam, Thomas Nozkowski, Joe Brainard, Catherine Murphy, A. R. Penck, Richard Artschwager, Pat Steir, Liu Xiaodong, and Kim Tschang-yeul.

“[The book] gives the reader an all-encompassing view of the artist.”
— The Strategist, New York Magazine