His Holiness the Fourteenth Dalai Lama: An Illustrated Biography (Hardcover) 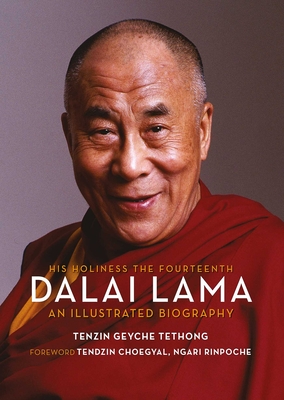 "The photographs are rare and superb. The stories are fresh and beautifully told. I was transported. I love this book.” –Richard Gere

This biography of the Dalai Lama—blessed by His Holiness himself—is the most authentic and intimate profile of the world’s greatest living spiritual figure. Tenzin Geyche Tethong, a close aide of His Holiness for forty years who became family, offers readers unprecedented access to the Dalai Lama in this beautifully illustrated book. The Dalai Lama’s youngest brother, Ngari Rinpoche Tenzin Choegyal, who was only 12 years old when he accompanied His Holiness on his dangerous 1959 escape to India, is a personal friend of Tethong and the mentor for this book project. As “elders” to the Tibetan community in exile, these men have come together to tell the true story of His Holiness—their brother, friend, and leader.

Featuring previously unpublished photographs, as well as interviews and memories of those closest to him, this book renders unparalleled insights into the Dalai Lama’s experiences as the preeminent leader of Tibet, and the wealth of his compassion and gentle humor in the face of the ongoing conflict. This is in no small part due to Tethong and Ngari Rinpoche’s unique perspectives on many sensitive issues.

Richly compelling, His Holiness the Fourteenth Dalai Lama: An Illustrated Biography is a stunning visual celebration of the Dalai Lama, sketching a memorable portrait of an icon and a cause that have won the attention and hearts of billions across the world.

• As his long-time personal secretary, Tethong was privy to the Dalai Lama’s difficult relationship with India during his exile, with many challenges arising from his host country’s ambivalence to Tibet. Tethong candidly discusses India’s lackluster attempts at uplifting his people—denying them official documentation, restricting employment, and crowding refugees in the remote location of Dharmsala—citing its fear of angering China as the reason behind its ambivalence towards Tibet.

• Tethong also sheds much-needed light on the Dalai Lama’s Nobel Prize-winning campaign for the spiritual and political liberation of his people. He adopts a nuanced approach towards the Dalai Lama’s non-violent struggle for Tibetan autonomy, writing frankly about their attempts to mediate the political differences between younger Tibetans in Dharmsala and the Tibetan administration. He also explores the numerous political difficulties faced by the Dalai Lama’s cause in the years before its worldwide recognition.This beautifully illustrated chronicle presents an in-depth, firsthand narrative of the Dalai Lama’s life story and the Tibetan saga. From remembrances of those close to him, and a treasure trove of over 400 images of Tibet’s priceless visual heritage, it preserves a record of what it was like to create a nation from nothing, in exile, and how His Holiness rallied endlessly for his people. A rich blend of biography, history, and legacy, it captures a detailed account of the tumultuous events through which the Dalai Lama was forced to chart a path, leading to his emergence as an international figure. It illuminates as well his initiatives in the wider world to relieve suffering, overcome global challenges, and foster human flourishing through compassionate universal ethics, working hand in hand with science and ingenuity.

Tenzin Geyche Tethong has been a trusted companion and aide to His Holiness, the Fourteenth Dalai Lama, for over four decades, and is part of a family legacy of service. Born in 1943 in Lhasa, Tethong first joined the Tibetan administrative service in the early 1960s, and later served in the Private Office of His Holiness until 2006. This is the first time that he has written about these remarkable years.

Jane Moore is an acclaimed photo researcher and editor. Formerly Photo Editor at the Sunday Times Magazine in London, she is the founder of Tibet Images, a picture archive dedicated to Tibet and the Tibetan diaspora. She is a leading expert on the cultural institution of the Dalai Lama and continues to build up a rare archive of his life and his people.

“Tenzin Geyche Tethong has written a book for all times: delightful, insightful, truthful, authentic, fun, moving, and important. Tenzin Geyche’s narrative is warm and knowing—he was there. This is a completely necessary addition to understanding who and what His Holiness the Fourteenth Dalai Lama truly is … and to feeling the heart and soul of Tibet. The photographs are rare and superb. The stories are fresh and beautifully told. I was transported. I love this book.”
— Richard Gere

“Via personal testimony and stunning, rarely seen photographs, Tethong chronicles the remarkable journey of a man who has led by example with kindness and empathy … A fluid work that effectively honors a gentle, compassionate teacher and writer … [H]andsomely illustrated …”

“[A] vivid insider’s look at the life of one of the most revered spiritual figures in the world … a gripping narrative and never-before-seen photos of the Dalai Lama and his family … This remarkably candid and intimate account sheds new light on the life of the world leader.”