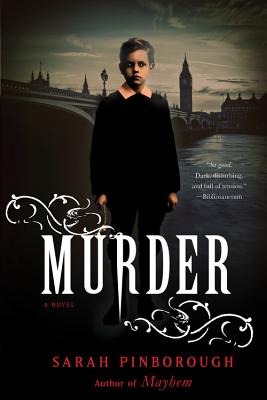 By Sarah Pinborough
Not Available from Us

"few writers blend mystery and the supernatural as well as Sarah Pinborough, but there are none who do it better. Quite, quite brilliant." --John Connolly, bestselling author of the Charlie Parker series
In this gripping sequel to the acclaimed Mayhem, Sarah Pinborough continues the adventures of troubled Victorian forensics expert Dr. Thomas Bond. Haunted by the nerve-shattering events he endured during the Jack the Ripper and Thames Torso Killer investigations, Dr. Bond is trying to reestablish the normal routines of daily life. Aiding in his recovery is the growing possibility that his long-held affections for the recently widowed Juliana Harrington might finally be reciprocated. He begins to allow himself to dream of one day forming a family with her and her young boy.
Soon, however, a new suitor arrives in London, challenging the doctor's claims on Juliana's happiness. Worse, it seems the evil creature that Dr. Bond had wrestled with during the Ripper and Torso Killer investigations is back and stronger than ever.
As the corpses of murdered children begin to turn up in the Thames, the police surgeon finds himself once again in a life-and-death struggle with an uncanny, inexorable foe.

Sarah Pinborough is a critically acclaimed horror, thriller and YA author.
Her short stories have appeared in several anthologies. Her novel The Hidden is currently in development as the movie "Cracked", and she has another original screenplay under option. She has written for New Tricks on the BBC and has a three-part TV series in development with World Productions.
She was the 2009 winner of the British Fantasy Award for Best Short Story, and has been short-listed three times for Best Novel. Her novella The Language of Dying was short-listed for the Shirley Jackson Award, and won the 2010 British. Her latest book is Behind Her Eyes.

"Deeply disturbing . . . The author's ingenuity in weaving her macabre plot becomes fully evident by the powerful, jaw-dropping end, and she skillfully instills fear in the reader even with innocuous phrases."—Publisher's Weekly (Starred Review)

Chosen as both Best Horror and Best Detective Novel 2014 by The Book Plank
"With Murder, Sarah Pinborough has really stepped up her game . . . Pinborough went above and beyond my expectations . . . a must read. It's a non-stop, quite disturbing ride through one of London's darkest parts of history, with an amazing cast and brilliant storyteller!—The Book Plank

"Murder is deeply dark, intelligent and exquisitely gruesome . . . [an] amazing and vibrant portrayal of Victorian London with the tangible gaps in the layers of society and between the innocent and the evil. Sarah Pinborough has written another superb book which from the beginning to the end keeps the reader on the proverbial edge of their seat . . . Murder is a poignant and unputdownable novel of the darkness of humanity and haunting malevolence with an exquisite dose of horror and supernatural."—Aleksandra Kesek, Fantasy Faction

"It's grim, gruesome and gripping, and it's tremendous fun."—SciFiNow