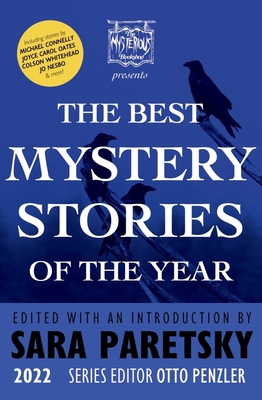 Under the auspices of New York City's legendary mystery fiction specialty bookstore, The Mysterious Bookshop, and aided by Edgar Award-winning anthologist Otto Penzler, international bestseller and MWA Grandmaster Sara Paretsky has selected the twenty most puzzling, most thrilling, and most mysterious short stories from the past year, collected now in one entertaining volume.


Plus a bonus vintage story from the annals of mystery fiction, written over a century in the past.

Sara Paretsky is the author of the bestselling V.I. Warshawski novels, including, most recently, Bleeding Kansas. Paretsky is the winner of many awards, including the Cartier Diamond Dagger award for lifetime achievement from the British Crime Writers’ Association. She lives in Chicago.


Otto Penzler, the creator of American Mystery Classics, is also the founder of the Mysterious Press (1975); Mysterious Press.com (2011), an electronic-book publishing company; and New York City’s Mysterious Bookshop (1979). He has won a Raven, the Ellery Queen Award, two Edgars (for the Encyclopedia of Mystery and Detection, 1977, and The Lineup, 2010), and lifetime achievement awards from Noircon and The Strand Magazine. He has edited more than 70 anthologies and written extensively about mystery fiction.

The stories take off from their humble points of origin into spaces few would have predicted, as they explore the terrain most familiar and yet most mysterious of all: the geography of the human heart. Imaginations run loose in the best ways possible.
— Kirkus STARRED REVIEW