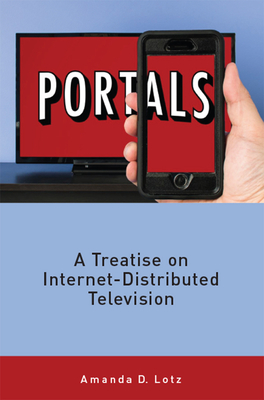 By Amanda Lotz
$10.99
Available to Order

Television audiences and its industry alike have been confused by the emergence of new ways to watch television. On one hand, the programs seem every bit like the television we’ve long known, while the way we can watch, what we can watch, and the business models supporting them differ significantly.

Portals: A Treatise on Internet-Distributed Television pushes understandings of the business of television to keep pace with the considerable technological change of the last decade. It explains why shows such as Orange is the New Black or Transparent are indeed television despite coming to screens over internet connection and in exchange for a monthly fee. It explores how internet-distributed television is able to do new things – particularly, allow different people to watch different shows chosen from a library of possibilities. This technological ability allows new audience behaviors and new norms in making television.
Portals are the “channels” of internet-distributed television, and Portals identifies how the task of curating a library of shows differs from channels’ task of building a schedule. It explores the business model—subscriber funding—that supports many portals, and identifies the key differences from advertiser or direct purchase. Portals considers what we know about the future of television, even though we remain early in a process of transformative change.