From Preaching to Meddling: A White Minister in the Civil Rights Movement (Hardcover) 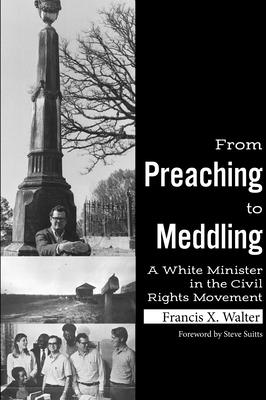 For years Southern minister Francis X. Walter was silent about the injustices of Jim Crow, blinded by the status quo, until the violent killing of a fellow priest during the civil rights movement. From Preaching to Meddling is the story of how Walter turned from passive objector to outspoken agitator, marked with Walter's humor and personal recollections of the most formative period of modern American history. In a fascinating, funny, sometimes searing memoir, retired Episcopal priest Francis X. Walter shares his journey from the days of the Great Depression in Mobile, Alabama, across decades of Deep South segregation, and into the interracial struggles for racial justice and freedom in Alabama. The founder of the Selma Inter-religious Project, Walter's story includes growing up in multi-ethnic, segregated Mobile and learning life lessons at theology schools in Sewanee and New York. Returning to Alabama, Walter spent years as an Episcopal priest navigating how to serve white parishes in Alabama while challenging the racism that most congregants believed was a God-given right. After the tragic murder of seminarian Jonathan Daniels shortly after the Selma to Montgomery March in 1965, Walter moved from pastoring segregationists to agitating against them as he became a committed supporter of the struggles for civil rights and racial justice in George Wallace's Alabama. From Preaching to Meddling is a personal chronicle of some of the nation's civil rights struggles in Alabama and of the memoirist's own struggles with faith and fault. While recounting the people and communities he joined in fighting against the white South's racial order in rural Alabama, Walter candidly shares questions, dilemmas, and perceptions of his own shortcomings. His is an engaging portrait of momentous times and of himself as both conflicted priest and crusading white Southerner.