Suncoast Empire: Bertha Honore Palmer, Her Family, and the Rise of Sarasota, 1910-1982 (Paperback) 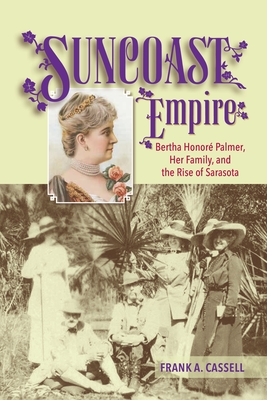 Silver Medal Florida Book Awards NonfictionIn the early 20th century, Bertha Palmer was one of the best-known and wealthiest women in America. She was an art collector, women's rights advocate, businesswoman, owner of Chicago's Palmer House Hotel, and had elegant homes in Chicago, Paris, and London. In 1910 she traveled to the small and rough settlement called Sarasota on the west coast of Florida. For some reason, she decided to spend much of each year for the rest of her life on one of America's last frontiers, investing in cattle and farming, creating communities out of marshlands, pine forests, and tropical jungles. The society queen and social reform advocate excelled as a frontier entrepreneur, just as she had in every other endeavor in her life. She managed to make a good deal of money and to change Sarasota forever.

Frank A. Cassell is Professor Emeritus and President Emeritus at the University of Pittsburgh at Greensburg. He earned the B.A. degree at Wabash College in Crawfordsville, Indiana, and his M.A. and Ph. D. degrees at Northwestern University. He taught and served as an administrator at the University of Wisconsin-Milwaukee and Roosevelt University in Chicago before taking the presidency at Pitt-Greensburg. Cassell has published books and articles on the colonial and early national periods of American history, the Columbian Exposition of 1893, social history in Indiana in the 19th century, and his experiences as a university president. The University of Pittsburgh Board Of Trustees named a new academic building at Pitt-Greensburg in his honor in 2012. He has also won awards for excellence in teaching, outstanding historical research, and community service. He retired and moved to Sarasota with his spouse, Beth, in 2007 and now serves as a member of the Sarasota County Historical Commission and as chair of the History and Preservation Coalition of Sarasota County.