Bitch: On the Female of the Species (Hardcover) 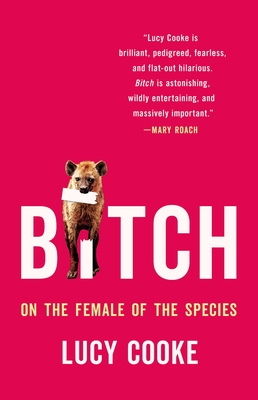 A fierce, funny, and revolutionary look at the queens of the animal kingdom

Studying zoology made Lucy Cooke feel like a sad freak. Not because she loved spiders or would root around in animal feces:& all her friends shared the same curious kinks. The problem was her sex. Being female meant she was, by nature, a loser.

Since Charles Darwin, evolutionary biologists have been convinced that the males of the animal kingdom are the interesting ones—dominating and promiscuous, while females are dull, passive, and devoted.

In Bitch, Cooke tells a new story. Whether investigating same-sex female albatross couples that raise chicks, murderous mother meerkats, or the titanic battle of the sexes waged by ducks, Cooke shows us a new evolutionary biology, one where females can be as dynamic as any male. This isn‘t your grandfather’s evolutionary biology. It’s more inclusive, truer to life, and, simply, more fun.

Lucy Cooke is the author of The Truth About Animals, which was short-listed for the Royal Society Prize, and the New York Times bestselling A Little Book of Sloth. She is a National Geographic explorer, TED talker, and award-winning documentary filmmaker with a master’s degree in zoology from Oxford University. She lives in Hastings, England.

“Cooke charts the rising influence of feminism on the ‘phallocracy’ of evolutionary biology over the past several decades, arguing for the power of more recent female-led science to, for example, reframe core beliefs about sexual selection, maternal instinct and self-sacrifice, and proclivities for monogamy or nymphomania. In doing so, she introduces us to a marvelous zoetrope of animals—not just primates, but venomous intersex moles, hyenas that give birth through their clitoris, filicidal mother meerkats, and postmenopausal orcas.”
—The Atlantic

“An important corrective to the ‘accidental sexism’ baked into so many biological studies… [and] a clarion call that the remaining terra incognita of female biology merits far more comprehensive mapping.”

“[An] effervescent exposé… [A] playful, enlightening tour of the vanguard of evolutionary biology.”

“When did we decide that female animals (including humans) are the noncompetitive gender? Cooke, a British science journalist, argues persuasively against that assessment in an informative and often cheeky investigation that details mating and more. She also shows what a difference women make to scientific inquiry, asking questions and proposing studies their male colleagues didn’t think of — or didn’t bother with.”—Bethanne Patrick, LA Times

“By analysing numerous animals, this sparkling attack on scientific sexism draws on many scientists — of multiple genders — to correct stereotypes of the active male versus passive female.”

“In compelling and often hilarious prose, Cooke combines the humor and clarity of science writer Mary Roach with the scientific authority she has earned as a trained biologist as she confronts the long history of androcentric assumptions baked into evolutionary biology and begins to set the record straight.”—Jessie Rack, Science

"Cooke demolishes much of what you probably learned about the sexes in biology class. This may be
disconcerting, even confronting for those who feel comfortable in the warm embrace of Darwinian order. But it’s also exciting, and fascinating, and very well might change the way you see the world."
—Science News

“Cooke dives into sex and gender across the animal kingdom, dispelling all the misogynist notions of females being the weaker sex…This book elevates not just the science itself but the scientists that have been marginalized for too long.”
—Lucy Roehrig, Booklist

“Bitch is an impressive contribution to what has become a highly polarized debate over sex and gender. It
succeeds not just because Cooke is a witty and entertaining writer, but because she has done her homework well…her
message is…that sex, rather than being one thing and its opposite, is in fact a spectrum of limitless possibilities.”—Natural History

“Documentarian, zoologist, and author Lucy Cooke dives deep on the fascinating females of the animal kingdom in Bitch: On The Female Of The Species. In this delightful, revelatory survey of cross-species sexism (already on shelves in the UK), Cooke treats readers to an information-dense reframing of the many misunderstandings around sex and sexuality that burden ‘girls’ of all kinds. Come for the promise of some really neat nature facts. Stay for Cooke picking apart the misogynistic underpinnings of Charles Darwin’s fundamentally flawed theory of evolution.”—AV Club

“A 300 page romp through the animal kingdom and 150 years of sexist science that demonstrates that 'female animals are just as promiscuous, competitive, aggressive, dominant and dynamic as males'. We meet a staggering array of females taking their reproductive destinies into their own paws.”
—Rachel Cunliffe, The New Statesman

“A dazzling, funny and elegantly angry demolition of our preconceptions about female behaviour and sex in the animal kingdom… Bitch is a blast. I read it, my jaw sagging in astonishment, jotting down favourite parts to send to friends and reading out snippets gleefully.”—The Observer

“In vivid detail, Cooke highlights animals that defy stereotypes. . .The author has a charmingly irreverent style that, among other things, pokes holes in the sexist scientific research of old that used cherry-picked data to conclude females weren’t worth studying.”—Publishers Weekly

“A top-notch book of natural science that busts myths as it entertains.”
—Kirkus

“Brilliant… readers will never see the world the same way again… [Bitch inspires] awe in the breathtaking diversity of nature and the evolutionary roots of our behaviour.”
—Times Literary Supplement

“Cooke expertly explains current scientific research with engaging humor, interspersed with first  person accounts and an impressive number of interviews with scientists who are rewriting the binary narrative.”
—Library Journal

"Excellent, detailed and witty revelations of the mating, mothering, menopause, and politics, of the female of the species."—New York Journal of Books

“[A] fabulous and fun book about badass females.”—BookRiot

“As we search to define our gender, combat prejudice and misogyny, and celebrate the myriad of femininity, Lucy Cooke looks to the animal kingdom to see what it can teach us about femininity’s true nature.”—Reaction

“A charming mix of wit and scientific analysis… Aside from knocking males off their evolutionary perch and
empowering women, this book can inspire the LGBTQ community, as it’s clear that their identities and lives are reflected across the natural world.”
—Irish Times

“The stories in Bitch are rich in detail, and Cooke is an hilarious and engaging writer.”—iNews

"A glorious rebuttal of everything we have believed about gender since Charles Darwin got it all wrong."—Daily Mirror

“Mr. Darwin, your time is up. This is the evolutionary reboot us bitches have been waiting for.”—Sue Perkins, comedian

“A triumphant upending of the outworn sexist mythology that pervades our scientific perception of all animals—including ourselves. With intelligence and great wit, Bitch explores the dynamic, diverse ways of being female on an ever-evolving planet. This is a joyous revolution.”—Lyanda Lynn Haupt, author of Rooted and Mozart’s Starling

“Fun, informative and revolutionary all at once, Bitch should be required reading in school. After reading this book one will never look at an orca, an albatross, or a human the same way again. And the world will be better for it.”
—Agustin Fuentes, professor of anthropology at Princeton University and author of The Creative Spark