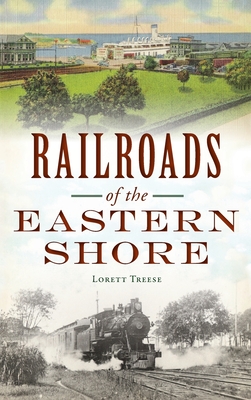 The history of the Delmarva Peninsula is inextricably entwined with the story of its railroads. The earliest railroads were short, locally funded lines. The dream to connect Norfolk directly to Eastern Seaboard cities farther north was first realized by the New York, Philadelphia & Norfolk Railroad in the 1880s. The line ran north-south along the peninsula to Cape Charles City, Virginia, where freight cars were loaded onto barges for the trip across the Chesapeake Bay. This line was eventually absorbed by the giant Pennsylvania Railroad, and the ferry service was eclipsed when the Chesapeake Bay Bridge-Tunnel was completed in 1964. For more than a century, though, railroads played a critical role in the development of the Eastern Shore. Regional historian Lorett Treese tells this story.