The Good Country Equation: How We Can Repair the World in One Generation (Paperback) 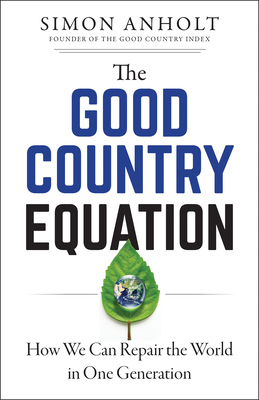 "Not only does Anholt explain the challenges facing the world with unique clarity, he also provides genuinely new, informative, practical, innovative solutions. . . . The book is a must-read for anyone who cares about humanity's shared future."
--H. E. Mohamed Abdullahi Mohamed (Farmaajo), President of the Federal Republic of Somalia

Why doesn't the world work? Why, despite all the power, technology, money and knowledge that humanity has accumulated, are we are still unable to defeat global challenges like climate change, war, poverty, migration, extremism, and inequality?

Simon Anholt has spent decades helping countries from Austria to Zambia to improve their international standing. Using colorful descriptions of his experiences--dining with Vladimir Putin at his country home, taking a group of Felipe Calderon's advisors on their first Mexico City subway ride, touring a beautiful new government hospital in Afghanistan that nobody would use because it was in Taliban-controlled territory--he tells how he began finding answers to that question.

Ultimately, Anholt hit on the Good Country Equation, a formula for encouraging international cooperation and reinventing education for a globalized era. Anholt even offers a "selfish" argument for cooperation: he shows that it generates goodwill, which in turn translates into increased trade, foreign investment, tourism, talent attraction, and even domestic electoral success. Anholt insists we can change the way countries behave and the way people are educated in a single generation--because that's all the time we have.

Simon Anholt has advised the presidents, prime ministers, and government officials of fifty-six countries, helping them to engage more imaginatively and effectively with the international community. Anholt publishes the Good Country Index, an annual survey that ranks countries on their contribution to humanity and the planet. His TED Talk launching the Good Country Index has been viewed over 6 million times, and his nine TEDx Talks over a million. He has written five books about countries, cultures, and globalization.

“From the loveliest descriptions of people and places he’s encountered over the years, Anholt distills some marvelous and delightful insights. He ruminates on our wretched condition … and offers up a gem of a proposal to reverse that trend.”
- Zeid Ra'ad Al Hussein, U.N. Human Rights High Commissioner 2014-2018

“Anholt’s book is a remarkable achievement. Not only does he explain the challenges facing the world with unique clarity, he also provides genuinely new, informative, practical, innovative solutions … a must-read for anyone who cares about humanity’s shared future.”
- H.E. Mohamed Abdullahi Mohamed, President of Somalia.

“An inspiring book with practical recommendations on how to build a better world.”
- Peggy Serame, Minister of Trade, Botswana.

“Trying to make sense of what is going on in the world? This is your answer. Simon Anholt, one of today’s most original and influential thinkers on international affairs, makes a convincing case for why countries should cooperate rather than compete in today’s world of global disorder.”
- Alexander Stubb, Prime Minister of Finland 2014-2015

“This important new book is a must-read for anyone who cares about the future of humanity and the planet. Anholt’s message of co-operation and collaboration is a true beacon of hope in troubled times.”
- Bocchit Edmond, Foreign Minister, Haiti.

“The ability to accurately observe and understand the complexity of our world is not so common. Anholt is one of the rare people who can.”
- Valdis Zatlers, President of Latvia 2007-2011