The Enchantment of New York: 75 of Manhattan's Most Magical and Unique Attractions (Paperback) 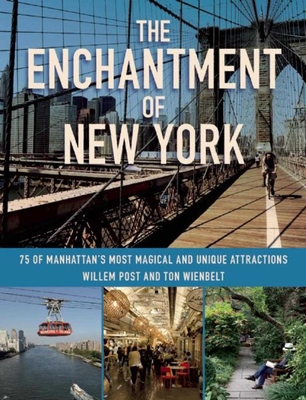 By Willem Post, Ton Wienbelt
Not Available from Us

New York is the city where every visitor and native is bound to fall in love—whether with the thousands of colorful yellow cabs, the aromas of foods from every culture sizzling, or a secluded, relaxing spot hidden among the skyscrapers. It is the ultimate melting pot, and it is overflowing with magic and mystery.

Let the authors take you on a tour of the city, from famous landmarks to less well-known haunts. They will take you from the northernmost tip of Manhattan through the oasis of Central Park, and past monuments, markets, museums, churches, and bars all along the way. Follow their route or pick your favorites and make a day out of it!

With seventy-five special New York City spots included, each features transit information like which subway train line to take and which stop will get you closest to your destination. Additionally, the book includes a unique barcode for each individual spot, which readers can scan with their smartphone to directly view the official webpage and learn more about the spots they like best. A necessary tool for anyone who lives in New York or dreams of being in the city, let The Enchantment of New York take you on a journey of its own.

Willem Post is connected to the Institute of Clingeldael in The Hague as an expert on America. This well-known media commentator has a variety of studies to his name, such as the reprinted Obamawereld. He has led a number of Dutch delegations to New York. Previously he published a series about cities, including New York, in Amsterdam’s newspaper Het Parool. He resides in Houtrustweg, the Netherlands.

Ton Wienbelt is a graphic designer and photographer with years of experience in city portraits. He has contributed to many books. He considers New York one of the most photogenic cities in the world and has visited many times. He resides in Houtrustweg, the Netherlands.

"Unique, informative, exceptionally well organized and presented, The Enchantment of New York fully lives up to its title and is very highly recommended for anyone contemplating a visit to the Big Apple! —Midwest Book Review

"Unique, informative, exceptionally well organized and presented, The Enchantment of New York fully lives up to its title and is very highly recommended for anyone contemplating a visit to the Big Apple! —Midwest Book Review