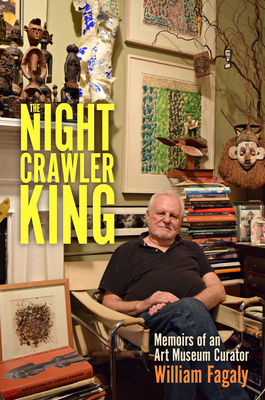 By William Fagaly
$28.00
Available to Order

While growing up in rural Indiana during World War II, William Fagaly began his first venture--collecting and selling earthworms to locals--from which he was christened with a childhood moniker. The Nightcrawler King: Memoirs of an Art Museum Curator is a narrative of Fagaly's life told in two parts: first, his childhood experiences and, second, his transformation into an adult art museum curator and administrator in Louisiana. With a career that coincided with the dramatic growth of museums in the United States, Fagaly adds a unique perspective to New Orleans history, which highlights Louisiana history and establishes how it resonates around the nation and world. Offering a rare and revealing inside look at how the art world works, Fagaly documents his fifty years of experience of work--unusually spent at a single institution, the New Orleans Museum of Art. During this past half century, he played an active role in the discovery and appreciation of new areas of art, particularly African, self-taught, and avant-garde contemporary. He organized numerous significant art exhibitions that traveled to museums across the country and authored the accompanying catalogs. Fagaly's cherished memories and the wonderful people who have touched his life are showcased in this memoir--friends, family, university professors, museum colleagues, art historians, visual artists, musicians, art dealers, art collectors, patrons, and partners--even his cats.

William Fagaly is curator emeritus at the New Orleans Museum of Art where he served for fifty years as curator of African art, contemporary art, and self-taught art as well as assistant director for over twenty years. He organized over ninety exhibitions, most with accompanying catalogs.