Granite Mountain: The Firsthand Account of a Tragic Wildfire, Its Lone Survivor, and the Firefighters Who Made the Ultimate Sacrifice (Compact Disc) 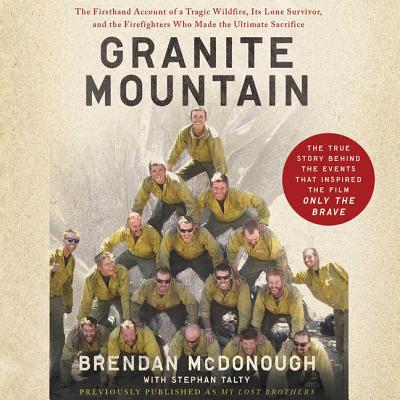 By Brendan McDonough, Stephan Talty (Contribution by), John Glouchevitch (Read by)
Not Available from Us

The true story behind the events that inspired the major motion picture Only the Brave. A "unique and bracing" (Booklist) first-person account by the sole survivor of Arizona's disastrous 2013 Yarnell Hill Fire, which took the lives of 19 "hotshots"--firefighters trained specifically to battle wildfires.Brendan McDonough was on the verge of becoming a hopeless, inveterate heroin addict when he, for the sake of his young daughter, decided to turn his life around. He enlisted in the Granite Mountain Hotshots, a team of elite firefighters based in Prescott, Arizona. Their leader, Eric Marsh, was in a desperate crunch after four hotshots left the unit, and perhaps seeing a glimmer of promise in the skinny would-be recruit, he took a chance on the unlikely McDonough, and the chance paid off. Despite the crew's skepticism, and thanks in large part to Marsh's firm but loving encouragement, McDonough unlocked a latent drive and dedication, going on to successfully battle a number of blazes and eventually win the confidence of the men he came to call his brothers.Then, on June 30, 2013, while McDonough--"Donut" as he'd been dubbed by his team--served as lookout, they confronted a freak, 3,000-degree inferno in nearby Yarnell, Arizona. The relentless firestorm ultimately trapped his hotshot brothers, tragically killing all 19 of them within minutes. Nationwide, it was the greatest loss of firefighter lives since the 9/11 attacks. Granite Mountain is a gripping memoir that traces McDonough's story of finding his way out of the dead end of drugs, finding his purpose among the Granite Mountain Hotshots, and the minute-by-minute account of the fateful day he lost the very men who had saved him. A harrowing and redemptive tale of resilience in the face of tragedy, Granite Mountain is also a powerful reminder of the heroism of the people who put themselves in harm's way to protect us every day.