The Gospel of Trees: A Memoir (Paperback) 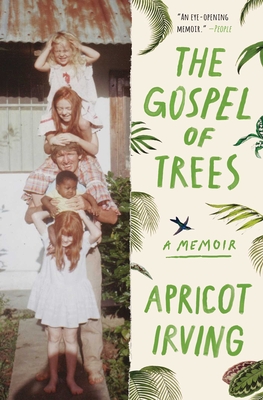 In an “eye-opening memoir” (People) “as beautiful as it is discomfiting” (The New Yorker), award-winning writer Apricot Irving untangles her youth on a missionary compound in Haiti.

Apricot Irving grew up as a missionary’s daughter in Haiti. Her father was an agronomist, a man who hiked alone into the deforested hills to preach the gospel of trees. Her mother and sisters spent their days in the confines of the hospital compound they called home. As a child, this felt like paradise to Irving; as a teenager, it became a prison. Outside of the walls of the missionary enclave, Haiti was a tumult of bugle-call bus horns and bicycles that jangled over hard-packed dirt, road blocks and burning tires triggered by political upheaval, the clatter of rain across tin roofs, and the swell of voices running ahead of the storm.

Poignant and explosive, Irving weaves a portrait of a missionary family that is unflinchingly honest: her father’s unswerving commitment to his mission, her mother’s misgivings about his loyalty, the brutal history of colonization. Drawing from research, interviews, and journals—her parents’ as well as her own—this memoir in many voices evokes a fractured family finding their way to kindness through honesty.

Told against the backdrop of Haiti’s long history of intervention, it grapples with the complicated legacy of those who wish to improve the world, while bearing witness to the defiant beauty of an undefeated country. A lyrical meditation on trees and why they matter, loss and privilege, love and failure. The Gospel of Trees is a “lush, emotional debut...A beautiful memoir that shows how a family altered by its own ambitious philanthropy might ultimately find hope in their faith and love for each other, and for Haiti.” (Publishers Weekly, starred review).

Apricot Anderson Irving is currently based in the woods outside Portland, Oregon, but has lived in Haiti, Indonesia, and the UK. Her missionary parents moved to Haiti when she was six years old; she left at the age of fifteen. She returned to Haiti in the spring of 2010 to cover the earthquake for the radio program This American Life. She is the recipient of a Rona Jaffe Foundation Writers’ Award and an Oregon Literary Arts Fellowship. Her renowned oral history project, BoiseVoices.com, was a collaboration between youth and elders to record the stories of a neighborhood in the midst of gentrification. She loves to garden, and on rare occasions she can be persuaded to belt out Irish folk songs in bars. The Gospel of Trees is her first book.

"Finely crafted...Irving moves seamlessly between the wide-eyed perspective of the child and the critical gaze of the adult, creating a tale as beautiful as it is discomfiting."
— The New Yorker

“Lush, emotional debut...A beautiful memoir that shows how a family altered by its own ambitious philanthropy might ultimately find hope in their faith and love for each other, and for Haiti.”
— Publisher’s Weekly (starred review)

“With insight and admirable even-handedness, Irving shows the complex forces at play in both the story of Haiti’s cycle of poverty and the more personal dynamics at play in her family as they struggle mightily to do God’s work.”
— Booklist

"Provide[s] a useful view of the inherent ethical and moral ambiguities of well-meaning but sometimes ineffective charitable interventions in Haiti."
— Library Journal

“Saving souls and saving Haiti, one tree at a time: this is the charge of the Anderson family when it arrives in Haiti in 1981. They are "the sent ones," Baptist missionaries led by a workaholic agronomist father who walks the hills declaiming Bible verses about trees in Haitian Kreyol. If a memoir's worth lies in the truths it's willing to tell, then The Gospel of Trees is the most worthwhile of memoirs, an unflinching and gorgeously written account of a young girl's coming of age in a difficult family, in one of the world's most difficult places. How do we survive our own lives? "Such endeavors only look easy from a distance," writes Apricot Irving, née Anderson, apropos of planting trees, though of course it's about so much more than those trees. Her story hits hard, and sticks, as only the very best stories do.”
— Ben Fountain, New York Times bestselling author of Billy Lynn’s Long Halftime Walk

“An engaging, detailed, nuanced and penetrating look at the seldom-studied effects of the do-gooders on the countries, communities, families they seek to improve. Neither sugar-coated, nor cynical, Apricot Irving has mastered the most difficult aspect of this kind of memoir: the just-right tone of compassion and hard-earned hope. Hers is a valuable lived experience which she reports in lucid and lively writing. We learn not just about Haiti, but about families, about the human heart. A family memoir, a coming of age story, an exploration of a country greatly loved and little understood. A cautionary tale for all those setting out to do good, may this gospel be read as the good news it is—a moral compass and a must read for all of us who struggle with how to create a better world.”
— Julia Alvarez, author of numerous novels, including How the García Girls Lost Their Accents, In the Time of the Butterflies, and Saving the World, as well as the memoir, A Wedding in Haiti

“A beautiful exploration of hope and hubris. Irving shows us the many entanglements among our relationships with the land, other cultures, and the mysteries of our own families.”
— David George Haskell, author of The Songs of Trees and Pulitzer Prize finalist The Forest Unseen

“The Gospel of Trees is rich with such passionate insights; also, it’s a rare thing to find an insider account of missionary life not blunted by conventional piety. Very particularly sensitive to Haiti, this book is an object lesson for anyone wanting to do good in the world: forget about moving that mountain of sand with your tweezers; you will (as the old Vodou song has it) be carrying water with a spoon.”
— Madison Smartt Bell, award-winning author of All Soul’s Rising