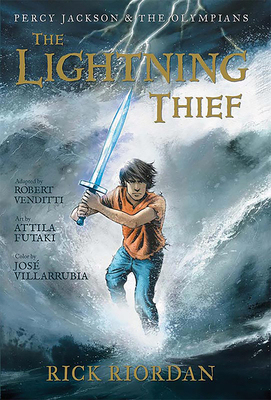 Book One in the #1 New York Times bestselling Percy Jackson and the Olympians series gets the graphic novel treatment from three big names in the comic book industry.
You've read the book. You've seen the movie. Now submerge yourself in the thrilling, stunning, and action-packed graphic novel.
An adaptation of Rick Riordan's The Lightning Thief novel, whichMythological monsters and the gods of Mount Olympus seem to be walking out of the pages of twelve-year-old Percy Jackson's textbooks and into his life. And worse, he's angered a few of them. Zeus's master lightning bolt has been stolen, and Percy is the prime suspect. Now, he and his friends have just ten days to find and return Zeus's stolen property and bring peace to a warring Mount Olympus.

Series creator Rick Riordan joins forces with three of the biggest names in the comic book industry to tell the story of a boy who must unravel a treachery more powerful than the gods themselves. It's the perfect introduction to the series and to Greek mythology.

Rick Riordan, dubbed “storyteller of the gods” by Publishers Weekly, is the author of five #1 New York Times best-selling middle grade series with millions of copies sold throughout the world: Percy Jackson and the Olympians, The Heroes of Olympus, and the Trials of Apollo, based on Greek and Roman mythology; the Kane Chronicles, based on Ancient Egyptian mythology; and Magnus Chase and the Gods of Asgard, based on Norse mythology. Rick collaborated with illustrator John Rocco on two #1 New York Times best-selling collections of Greek myths for the whole family: Percy Jackson’s Greek Gods and Percy Jackson’s Greek Heroes. Rick is also the publisher of an imprint at Disney-Hyperion, Rick Riordan Presents, dedicated to finding other authors of highly entertaining fiction based on world cultures and mythologies. He lives in Boston, Massachusetts with his wife and two sons. Follow him on Twitter at @RickRiordan.

Robert Venditti (www.robertvenditti.com) is the creator and author of The Surrogates and its prequel, The Surrogates: Flesh and Bone. In addition to creating comics, he works at Top Shelf Productions. He lives in Atlanta, Georgia.


Attila Futaki (pencils and inks) has illustrated Sprial (Editions Carabas, June 2008) and the forthcoming The Strange Folks (2010), as well as a number of book covers and interiors. He studied at the International School of Comics in Florence. He lives in Budapest, Hungary.


Jose Villarrubia (coloring) is an Eisner Award-nominated colorist who has worked for every major comic book publisher. Coloring work includes Young X-Men, Crossing Midnight, and Halo Uprising. Additionally, he is an art professor at the Maryland Institute College of Art. He lives in Baltimore, Maryland.