Gringo: A Coming of Age in Latin America (Paperback) 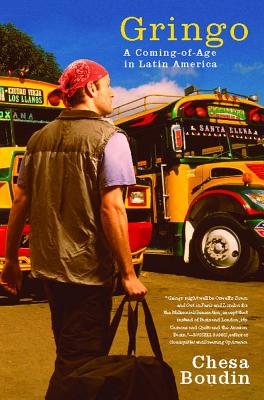 "In Gringo, Chesa Boudin takes us on a delightfully engaging trip through Latin America, in an ingenious combination of memoir and commentary" (Howard Zinn).

Gringo charts two journeys, both of which began a decade ago. The first is the sweeping transformation of Latin American politics that started with Hugo Chávez's inauguration as president of Venezuela in 1999. In that same year, an eighteen-year-old Chesa Boudin leaves his middle-class Chicago life -- which is punctuated by prison visits to his parents, who were incarcerated when he was fourteen months old for their role in a politically motivated bank truck robbery -- and arrives in Guatemala. He finds a world where disparities of wealth are even more pronounced and where social change is not confined to classroom or dinner-table conversations, but instead takes place in the streets.

While a new generation of progress-ive Latin American leaders rises to power, Boudin crisscrosses twenty-seven countries throughout the Americas. He witnesses the economic crisis in Buenos Aires; works inside Chávez's Miraflores palace in Caracas; watches protestors battling police on September 11, 2001, in Santiago; descends into ancient silver mines in Potosí; and travels steerage on a riverboat along the length of the Amazon. He rarely takes a plane when a fifteen-hour bus ride in the company of unfettered chickens is available.

Including incisive analysis, brilliant reportage, and deep humanity, Boudin's account of this historic period is revelatory. It weaves together the voices of Latin Americans, some rich, most poor, and the endeavors of a young traveler to understand the world around him while coming to terms with his own complicated past. The result is a marvelous mixture of coming-of-age memoir and travelogue.

Chesa Boudin was elected San Francisco District Attorney in 2019 on a platform of ending mass incarceration and mitigating racial disparities in law enforcement. He previously served as a Liman Fellow in the San Francisco Public Defender’s Office and is on the board of the Civil Rights Corps. He was a Rhodes Scholar, earned his JD from Yale Law School, and is the author of Gringo: Coming of Age in Latin America.

"Gringo might well be Orwell's Down and Out in Paris and London for the Millennial Generation, except that instead of Paris and London, it's Caracas and Quito and the Amazon Basin." -- Russell Banks, author of Cloudsplitter and Dreaming Up America

"In Gringo, Chesa Boudin takes us on a delightfully engaging trip through Latin America, in an ingenious combination of memoir and commentary. The personal story is unflinchingly honest, and the political judgments nuanced and thoughtful. Latin America is at the outer edge of consciousness in this country, and Chesa Boudin brings it back to our attention, eloquently and vigorously." -- Howard Zinn

"This marvelous voyage of personal discovery provides a vivid portrait of the richness and diversity of Latin America, its wonders and suffering, the courage and irrepressible spirit of its people, as they are revealed to a thoughtful and sensitive eye during the most exciting and hopeful decade since the European conquests. It is an enthralling account, stimulating and provocative." -- Noam Chomsky

"This superb travel memoir has the benefit of an appealingly honest, intelligent, and reliable narrator, whose humorous self-scrutiny and compassionate insights bridge two worlds with extraordinary tact. I found it engrossing, moving, and compulsively readable." -- Phillip Lopate

"Boudin has a pitch-perfect ear for the cadences that make up daily life in a region grappling with change. More than a well-written and clear-eyed guide to the efforts of yet another generation of Latin American leaders and activists trying to chart their own way, it's a handbook for estadounidenses on how to listen to and learn from those below the Rio Grande who also call themselves Americans." -- Greg Grandin, author of Empire's Workshop

"A compelling firsthand account of the unregulated greed, social neglect, and deliberate misrule that has provoked so many Latin Americans to demand a better life for themselves and their children. Boudin's vivid reports are filled with memorable characters whose stories capture the tragedies and the promise of this vast region." -- John H. Coatsworth, director, Institute of Latin American Studies, Columbia University

"This is not Latin American for Yuppies, which shouldn't be much of a surprise, knowing the lineage. It's cheap beer, fried plantains, long dusty bus rides, radical politics, the repeated kindness of desperately poor people sharing what they have with an outsider, and Chesa Boudin's eagerness to share what he's seeing and what he's feeling, with sympathy and empathy -- as he tries to sort it all out. There's much to learn in this book." -- Seymour Hersh, the New Yorker