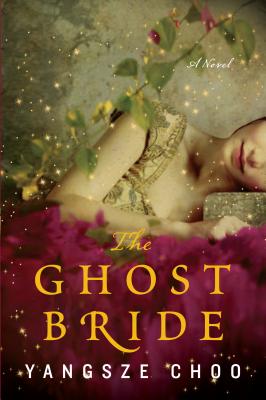 By Yangsze Choo
Email or call for price.

“If Lisa See and Elizabeth Bear collaborated on a book, the result would probably be something like Yangszee Choo's 'The Ghost Bride'. Set on the Malay Peninsula in the late 19th Century, this debut novel tells the story of Li Lan whose father promises her in marriage to the recently-dead son of a wealthy local family as a means of discharging his considerable debt. When the dead son begins visiting Li Lan in her dreams, she becomes increasing desperate to escape him. When an accidental overdose of a sleeping draught separates her sol from her body, she must navigate the world of the dead with the aid of two allies--Fan and Er Lang--neither of whom are whate they appear. Full of danger, romance, and eerie beauty, 'The Ghost Bride' is a fantastical novel about a young girl's quest to find her own destiny and choose love over duty.”
— Billie Bloebaum, Powell's Books At PDX, Portland, OR

Li Lan, the daughter of a respectable Chinese family in colonial Malaysia, hopes for a favorable marriage, but her father has lost his fortune, and she has few suitors. Instead, the wealthy Lim family urges her to become a "ghost bride" for their son, who has recently died under mysterious circumstances. Rarely practiced, a traditional ghost marriage is used to placate a restless spirit. Such a union would guarantee Li Lan a home for the rest of her days, but at what price? Night after night, Li Lan is drawn into the shadowy parallel world of the Chinese afterlife, where she must uncover the Lim family's darkest secrets--and the truth about her own family.Reminiscent of Lisa See's Peony in Love and Amy Tan's The Bonesetter's Daughter, The Ghost Bride is a wondrous coming-of-age story and from a remarkable new voice in fiction.