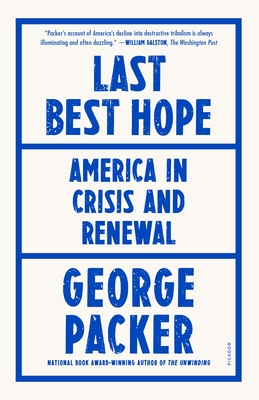 In the year 2020, Americans suffered one rude blow after another to their health, livelihoods, and collective self-esteem. A ruthless pandemic, an inept and malign government response, polarizing protests, and an election marred by conspiracy theories left many citizens in despair about their country and its democratic experiment. With pitiless precision, the year exposed the nation’s underlying conditions—discredited elites, weakened institutions, blatant inequalities—and how difficult they are to remedy.

In Last Best Hope, George Packer traces the shocks back to their sources. He explores the four narratives that now dominate American life: Free America, which imagines a nation of separate individuals and serves the interests of corporations and the wealthy; Smart America, the world view of Silicon Valley and the professional elite; Real America, the white Christian nationalism of the heartland; and Just America, which sees citizens as members of identity groups that inflict or suffer oppression.

In lively and biting prose, Packer shows that none of these narratives can sustain a democracy. To point a more hopeful way forward, he looks for a common American identity and finds it in the passion for equality—the “hidden code”—that Americans of diverse persuasions have held for centuries. Today, we are challenged again to fight for equality and renew what Alexis de Tocqueville called “the art” of self-government. In its strong voice and trenchant analysis, Last Best Hope is an essential contribution to the literature of national renewal.

George Packer is an award-winning author and staff writer at The Atlantic. His previous books include The Unwinding: An Inner History of the New America (winner of the National Book Award), The Assassins’ Gate: America in Iraq, and Our Man: Richard Holbrooke and the End of the American Century (winner of the Hitchens Prize and the Los Angeles Times Book Prize for biography). He is also the author of two novels and a play, and the editor of a two-volume edition of the essays of George Orwell.

"In 2021, almost nothing is harder to write than a fresh take on the multiple crises confronting post-Trump America. But with this sharp, short new book, that is exactly what George Packer has given us, confirming his place as one of our most valuable journalists . . . Packer’s courage [is] the closest we have to Orwell’s." —Charles Kaiser, The Guardian

"Like many public intellectuals who are worth reading, George Packer . . . [doesn't] toe a predictable line . . . Packer is at his best when he ties his thesis about Americans’ loss of the art of self-government to the inequality that he has covered extensively and intimately in his career as a journalist." —Emily Bazelon, The New York Times Book Review

"Packer has a story to tell about our decline, and he tells it well . . . Packer’s sharp portraits of [America's factions] are the heart of this book . . . [His] account of America’s decline into destructive tribalism is always illuminating and often dazzling." —William Galston, The Washington Post

“In the great tradition of Richard Hofstadter, but with a reporter’s eye, George Packer has given us a thoughtful and ultimately hopeful book about crisis and opportunity. Americans seeking to understand our current moment—which is to say, most Americans—will find much to profitably ponder in these pages.” —Jon Meacham, author of His Truth Is Marching On and The Soul of America

“George Packer has written a small but big book. The end of the pandemic should be pure joy, but the fact that a public health crisis deepened our divisions has weighed down our hearts. Is there anything that could glue us together as one people? Packer answers yes. And the case he makes in doing so provides the vaccine I have most wanted—hope.” —Atul Gawande, surgeon and author of Being Mortal and The Checklist Manifesto

“In Last Best Hope, George Packer retells the story of 2020, offering an original account of the fracturing of the country’s mind and suggesting how we might restore unity. Ranging from Tocqueville to Trump, this extended essay will provoke you to think harder about America’s past as well as America’s future.” —Anne Applebaum, author of Twilight of Democracy and Gulag

“In the summer of 2020, America seemed to divide into two different nations. Anyone who observed the crack-up will cherish this flinty analysis, which offers new insights into how Americans from Frances Perkins to Bayard Rustin to those who stormed the U.S. Capitol have understood and defined freedom. The result is a clear-eyed explanation of how a progressive nation can be a unified one.” —John H. McWhorter, professor of linguistics at Columbia University, contributing editor at The Atlantic, and host of Slate’s Lexicon Valley