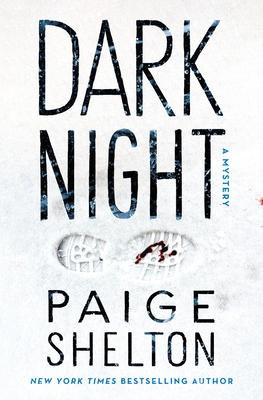 This is book number 3 in the Alaska Wild series.

Dark Night marks the third book in the gripping, atmospheric Alaska Wild series from Paige Shelton, in which Benedict, Alaska is met with some unexpected visitors…and then disappearances.

Winter is falling in the remote town of Benedict, Alaska, and with the cold comes a mysterious guest. The dreaded "census man," seemingly innocuous, is an unwelcome presence to those members of this secretive community who would prefer to keep their business to themselves. Meanwhile, thriller writer Beth Rivers has received her own unexpected company: her mother. The last Beth heard, Mill Rivers had gone underground in the lower forty-eight, in search of Beth’s kidnapper, and Beth can't help but be a little alarmed at her appearance: If Mill was able to track down her daughter, who knows who else might be able to?

Beth doesn't have time to ponder this for long, after a battered woman stumbles into the town bar one night, and her husband is found dead the next morning. Suspicions immediately turn to the census man, but when he, too, goes missing, everyone in Benedict—including the police chief—is suspected, and Beth and Mill must work to uncover the truth.

"[A] riveting story with an unusual setting and cast of characters." —Library Journal (Starred, Pick of the Month)

"A page-turner with an unusual location." —Kirkus

"Riveting. Suspenseful and intriguing...Shelton's fans are sure to enjoy this compelling departure from her typical writing style." —Shelf Awareness