The Secret Guests: A Novel (Paperback) 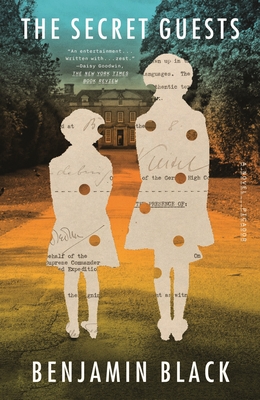 "When you're done binge-watching The Crown, pick up this multifaceted wartime thriller."
â€”Kirkus Reviews

As London endures nightly German bombings, Britainâ€™s secret service whisks the princesses Elizabeth and Margaret from England, seeking safety for the young royals on an old estate in Ireland.

Ahead of the German Blitz during World War II, English parents from every social class sent their children to the countryside for safety, displacing more than three million young offspring. In The Secret Guests, the British royal family takes this evacuation a step further, secretly moving the princesses to the estate of the Duke of Edenmore in â€œneutralâ€ Ireland.

A female English secret agent, Miss Celia Nashe, and a young Irish detective, Garda Strafford, are assigned to watch over â€œEllenâ€ and â€œMaryâ€ at Clonmillis Hall. But the Irish stable hand, the housemaid, the formidable housekeeper, the Duke himself, and other Irish townspeople, some of whom lost family to English gunshots during the War of Independence, go freely about their business in and around the great house. Soon suspicions about the guestsâ€™ true identities percolate, a dangerous boredom sets in for the princesses, and, within and without Clonmillis acreage, passions as well as stakes rise.

Benjamin Black, who has good information that the princesses were indeed in Ireland for a time during the Blitz, draws readers into a novel as fascinating as the nascent career of Miss Nashe, as tender as the homesickness of the sisters, as intriguing as Irish-English relations during WWII, and as suspenseful and ultimately action-packed as war itself.

Benjamin Black is the pen name of the Man Booker Prize-winning novelist John Banville. Black's books include The Black-Eyed Blonde, Christine Falls, The Silver Swan, among others. He lives in Dublin.

â€œAn entertainment. . . . [The princesses] are written with a republican zest, made all the keener by the knowledge that royalty, for all its anachronistic irrelevance, sells."
â€”The New York Times

"As ever, Black's gifts of rich description and deft characterization are on display. . . . When you're done binge-watching The Crown, pick up this multifaceted wartime thriller."
â€”Kirkus Reviews

â€œTantalizing. . . . Black is a pleasure to read, particularly his descriptions of the lackadaisically maintained estate [and] the young royalsâ€™ developing personalities. . . . [The Secret Guests] takes the time to observe the specific ways human weakness and caprice can affect history.â€
â€”Air Mail

"The Downton Abbey of suspense novels . . . brushed with the fairy tale dust of royalty."
â€”KATU