A Venom Dark and Sweet (The Book of Tea #2) (Hardcover) 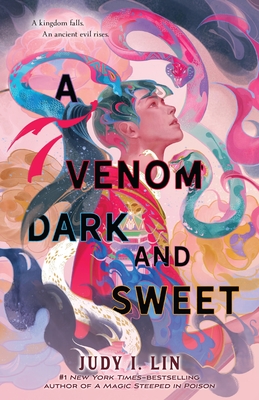 This is book number 2 in the The Book of Tea series.

The enthralling conclusion to Judy I. Lin's Book of Tea duology—#1 New York Times bestseller A Magic Steeped in Poison and A Venom Dark and Sweet—is sure to enchant fans of Adrienne Young and Leigh Bardugo.

A great evil has come to the kingdom of Dàxi. The Banished Prince has returned to seize power, his rise to the dragon throne aided by the mass poisonings that have kept the people bound in fear and distrust.

Ning, a young but powerful shénnóng-shi—a wielder of magic using the ancient and delicate art of tea-making—has escorted Princess Zhen into exile. Joining them is the princess' loyal bodyguard, Ruyi, and Ning's newly healed sister, Shu. Together the four young women travel throughout the kingdom in search of allies to help oust the invaders and take back Zhen's rightful throne.

But the golden serpent still haunts Ning's nightmares with visions of war and bloodshed. An evil far more ancient than the petty conflicts of men has awoken, and all the magic in the land may not be enough to stop it from consuming the world...

Judy I. Lin, #1 New York Times-bestselling author of the Book of Tea duology (A Magic Steeped in Poison and A Venom Dark and Sweet), was born in Taiwan and immigrated to Canada with her family at a young age. She grew up with her nose in a book and loved to escape to imaginary worlds. She now works as an occupational therapist and still spends her nights dreaming up imaginary worlds of her own. She lives on the Canadian prairies with her husband and daughters.

Praise for A Venom Dark and Sweet:

"Thrilling ... An immensely satisfying conclusion to this duology. ... Teens will be clamoring for more." —School Library Journal

Praise for A Magic Steeped in Poison:

"Beautifully written, from the setting to the magic system, A Magic Steeped in Poison is sure to enchant both fantasy lovers and cdrama aficionados. I’ll be inhaling whatever Judy I. Lin brews up next." —Joan He, New York Times-bestselling author of The Ones We're Meant to Find

"Blend threads of Chinese and Taiwanese mythology with a generous pinch of courage, a hint of romance, and a underlying note of mystery, then steep in a pot of court intrigue and serve in a bowl of evocative storytelling … Who could resist a fantasy about the magic of tea? In her remarkable debut novel, Judy I. Lin creates a world rich in folkloric magic, in which a young woman must stand up against the machinations of the powerful, centuries of protocol, and her own feelings of guilt in order to save a loved one." —Juliet Marillier, award-winning author of the Sevenwaters series

"Ning’s unforgettable voice and the lush, atmospheric settings will enchant readers in this high-stakes story of deadly magic. ... Lin blends Chinese folklore with a thrilling mystery. It's the perfect recipe for a page-turner." —Booklist, starred review

"Lush, descriptive prose sells the well-built magic system of this world, and every plot twist surprises and delights, making this a rich fantasy page-turner. As much a political thriller as a fantasy, this is a quieter, excellent companion to Xiran Jay Zhao’s Iron Widow and Chloe Gong’s These Violent Delights. The ending will have readers begging for the sequel." —School Library Journal

"Vivid descriptions of foods and scents of tea delight the senses, while cinematic prose captures the beauty of the landscapes ... The magic system is unique, and the tea competition, with its well-established importance to the protagonist, adds tension. ... This sophisticated fantasy is as refreshing as a freshly brewed pot of tea, and readers will eagerly await the sequel." —The Bulletin