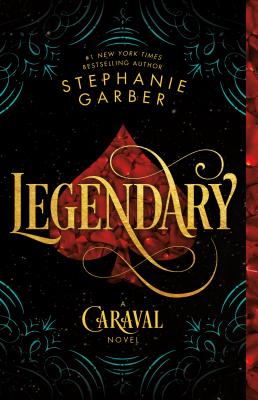 This is book number 2 in the Caraval series.

“Stephanie Garber delighted readers last year with her debut, Caraval,and her second story is just as beautiful and engrossing. In Legendary, we see Caraval through the eyes of the less trusting, more jaded Donatella. Starting out with Tell’s backstory, the reader begins to unwind the lies that surround her and, in doing so, the lies that permeate their world. Dark and dangerous,Legendarybrings the reader back to a decadent world where the only thing you know for certain is that you don’t know anything.  ”
— Jessica Cox, Plot Twist Bookstore, Ankeny, IA

The “immersive and imaginative“ (USA TODAY) games continue in the #1 NEW YORK TIMES bestseller LEGENDARY, the mesmerizing sequel to CARAVAL

Donatella and Scarlett Dragna escaped their cruel father and made it out of Caraval alive, but the games aren’t over yet. What Scarlett doesn’t know is that, in order to gain their freedom, Tella made a deal with a mysterious stranger and now it’s time to pay.

Except what Tella owes is something that no one has ever been able to deliver: the true name of Caraval Master Legend. Tella’s only chance at uncovering Legend’s true identity is to enter the dangerous game of Caraval once more, and win. But what will she have to sacrifice to do that?

Stephanie Garber is the #1 New York Times and internationally bestselling author of Once Upon a Broken Heart, The Ballad of Never After, and the Caraval trilogy. Her books have been translated into thirty languages.

“Themes of love, betrayal, family and forgiveness are explored as the narrative ratchets up the tension toward a conclusion that will leave readers clamoring for more. Fans of Caraval will love it, and new readers will be enthralled by this immersive and imaginative world.” —USA TODAY

“Legendary is a whirlwind adventure that contains vivid, complex, and enchanting characters you'll want to follow to the last page.” —BuzzFeed (Best YA Book of the Year)

“The setting of the game is fantastic in its spectacle and intrigue, and Garber pushes her world building even further. . . . The pacing is impeccable, with urgency increasing to an almost breathless point as Tella runs from clue to clue, while bittersweet truths and devastating betrayals unfold.” —The Bulletin, starred review

“A tour de force of imagination. Themes of love, betrayal, and the price of magic (and desire) swirl like Caraval’s enchantments, and Dante’s sensuous kisses will thrill readers as much as they do Tella. Dark, seductive, over-the-top: Characters and book alike will enthrall those who choose to play.” —Kirkus Reviews

“Caraval was a rollercoaster ride of twists and turns, and the latest installment lives up to that standard and more. Garber succeeds marvelously in broadening this magical, seductive world.” —New York Daily News