Judaism: The Genealogy of a Modern Notion (Key Words in Jewish Studies) (Paperback) 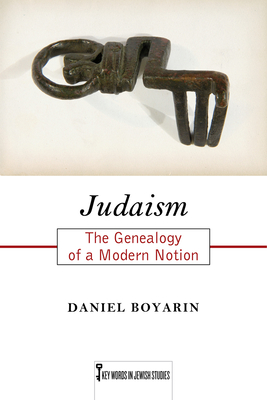 By Daniel Boyarin
Not Available from Us

Judaism makes the bold argument that the very concept of a religion of ‘Judaism’ is an invention of the Christian church. The intellectual journey of world-renowned Talmud scholar Daniel Boyarin, this book will change the study of “Judaism”—an essential key word in Jewish Studies—as we understand it today. Boyarin argues that although the world treats the word “Judaism” as appropriate for naming an alleged religion of the Jews, it is in fact a Christian theological concept only adopted by Jews with the coming of modernity and the adoption of Christian languages.

DANIEL BOYARIN is the Taubman Professor of Talmudic Culture at the University of California, Berkeley. He is the author or coauthor of several books, including Imagine no Religion: How Modern Abstractions Hide Ancient Realities.

"A brilliant book that marks a fresh beginning for scholarly conversations about Judaism, religion, and even the historical utility of categories."
— Annette Yoshiko Reed

"This book offers a reflective, and even-meta reflective discussion of the term 'Judaism.' Boyarin, as always, offers provocative, trail blazing insights to reckon with."
— Dina Stein

"What Boyarin does in Judaism is offer us a complex map, a detailed topography, of how the term Judaism came to be used to define Jewish 'doings,' and for some, to define Jews....One of the greatest things a scholar of Boyarin’s stature can do is make arguments that create the requisite space for future scholars to do their work. A book of this scope can never, and should never, close a conversation, but rather open one. Judaism is a term we all use reflexively but do not quite know what it actually means. Boyarin’s contribution to that reflexivity is a major contribution to scholarship."
— H-Judaic

"Boyarin’s book provide[s] [the reader] to think through some of these theoretical questions, and to continue our ongoing conversation about the ancient individuals, groups, and ideas that continue to resonate down to the present."
— Marginalia

" Boyarin’s provocative new book... succeeds at its primary goal: to destabilize the automatic use of 'Judaism' by scholars."
— Marginalia

"A wonderfully clever argument that demands we reconsider much of what we write and teach about Judaism."
— Marginalia

"What we thus have from Boyarin’s philological genealogy is one reading of 'Judaism' that begins as a negative, is turned into a positive, and then becomes irrelevant, except for those who share it with something else....Boyarin’s genealogy teaches us that Judaism can never stand alone or be alone. If Judaism is all there is, then the term 'Judaism' ceases to exist, mostly because it is no longer necessary."
— Marginalia

"Judaism: The Genealogy of a Modern Notion attests once again to Daniel Boyarin’s restlessly inquisitive mind and to his persistent need to challenge commonly held assumptions in a manner meant to be provocative and contrarian."
— Marginalia

"How Christians Invented 'Judaism,' According to a Top Talmud Scholar," by Tomer Persico
https://www.haaretz.com/israel-news/.premium-how-christians-invented-judaism-according-to-a-top-talmud-scholar-1.7417536
— Haaretz