The Long Retreat: The Calamitous Defense of New Jersey, 1776 (Hardcover) 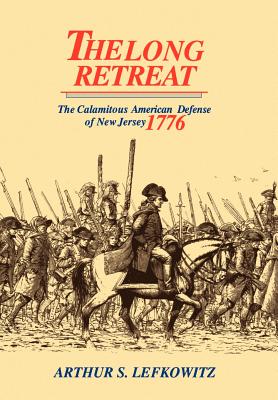 Winner of the 1998 Best Book on the Revolution published in 1998 by the Board of Governors of the American Revolution Round Table | Named 1999 Honor Book by the New Jersey Council for the Humanities.

On the morning of November 20, 1776, General Charles Cornwallis overran patriot positions at Fort Lee, on the New Jersey side of the Hudson River. The attack threw George Washington's army into turmoil. Thus began an American retreat across the state, which ended only after the battered rebels crossed the Delaware river at Trenton on December 7. It was a three-week campaign that marked the most dramatic and desperate period of the War for Independence. In The Long Retreat, Arthur Lefkowitz has written the first book-length study of this critical campaign. He adds compelling new detail to the narrative, and offers the most comprehensive account in the literature of the American retreat to the Delaware and of the British pursuit. What emerges is a history misconceptions about the movements of the armies, the intentions of their leaders, and the choices available to rebel commanders and their British counterparts. Lefkowitz presents a patriot military pounded into desperate straights by the forces of the Crown, but in the end more resilient and wily than most previous scholarship has allowed. If brought low over November and December of 1776, Washington's battalions were still a force to reckon with as they pulled away from the advancing British. Despite serious losses in material and personnel, Washington managed to keep his units operational; and even while making mistakes, he sought to consolidate patriot regiments and longed for a chance to counterattack. The Christmas night riposte at Trenton, a dramatic reversal of fortune in any case, stemmed from measures the rebel Commander-in-Chief had initiated even as he completed his retrogade across New Jersey. How all of this came about emerges and crisp narrative of The Long Retreat. It is the definitive book on a crucial chapter in the history of American Arms.

Dispels myth and conjecture while offering an exciting and compelling history of the events of late 1776.
— Richard Paterson