The Return of the Soldier (Modern Library Torchbearers) (Paperback) 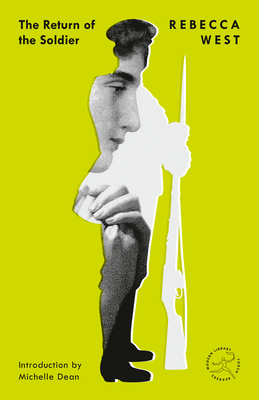 By Rebecca West, Michelle Dean (Introduction by)
$14.00
Available to Order

Jenny has been waiting for the return of her cousin, Lieutenant Chris Baldry, from the faraway front lines of the war in France. She has kept vigil alongside Chris’s wife, Kitty, who has also been mourning the death of their first child. However, when Chris returns to their isolated estate outside of London, he is a man transformed, suffering from shell shock and believing he is still twenty years old. He is baffled by his surroundings, which have somehow aged beyond his memory, and he’s hopelessly, obsessively in love with a woman. Except—the woman he’s in love with is not his wife. He doesn’t even remember her, or the son they lost. Instead, he declares his undying love for Margaret, a poor innkeeper’s daughter with whom he shared a passionate summer romance fifteen years prior.

Rebecca West published her often-overlooked debut novel at the age of only twenty-six during the height of World War I, and was one of the first writers to explore the impact of posttraumatic stress in literature. The result is a tense, gripping portrait of sacrifice, regret, and the transformative power of war to alter our understanding of ourselves.

Rebecca West (1892–1983) was a novelist, biographer, journalist, and critic. She published eight novels in addition to her masterpiece Black Lamb and Grey Falcon, for which she made several trips to the Balkans. Following World War II, West also published two books on the relation of the individual to the state, called The Meaning of Treason and A Train of Powder.

“Brilliant . . . [West was] an artist who wrote wonderful prose, who took chances with language and cadence, and who wrote poetically, even of prosaic subjects.”
—The New Republic