The Last Straw (Diary of a Wimpy Kid #3) (Hardcover) 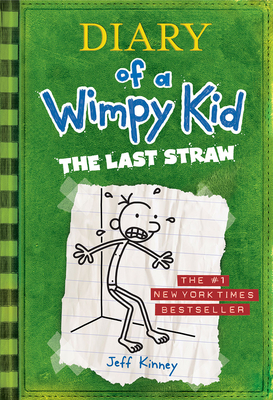 This is book number 3 in the Diary of a Wimpy Kid series.

The highly anticipated third book in the critically acclaimed and bestselling series takes the art of being wimpy to a whole new level.  Let’s face it: Greg Heffley will never change his wimpy ways. Somebody just needs to explain that to Greg’s father. You see, Frank Heffley actually thinks he can get his son to toughen up, and he enlists Greg in organized sports and other “manly” endeavors. Of course, Greg is able to easily sidestep his father’s efforts to change him. But when Greg’s dad threatens to send him to military academy, Greg realizes he has to shape up . . . or get shipped out. Greg and his family and friends, who make the Diary of a Wimpy Kid books a must-read for middle school readers, are back and at their best in this hilarious new installment of the series, which is sure to please current fans while attracting new ones. Publishers Weekly-1/19/2009:The third book in this genre-busting series is certain to enlarge Kinney’s presence on the bestseller lists, where the previous titles have taken up residence for the past two years. Kinney’s spot-on humor and winning formula of deadpan text set against cartoons are back in full force. This time, Greg starts off on New Year’s Day (he resolves to “help other people improve,” telling his mother, “I think you should work on chewing your potato chips more quietly”) and ends with summer vacation. As he fends off his father’s attempts to make him more of a man (the threat of military school looms), Greg’s hapless adventures include handing out anonymous valentines expressing his true feelings (“Dear James, You smell”), attempting to impress his classmate Holly and single-handedly wrecking his soccer team’s perfect season. Kinney allows himself some insider humor as well, with Greg noting the “racket” children’s book authors have going. “All you have to do is make up a character with a snappy name, and then make sure the character learns a lesson at the end of the book.” Greg, self-centered as ever, may be the exception proving that rule. Ages 8–12. (Jan.) F&P level: T

Jeff Kinney is a #1 New York Times bestselling author of the Diary of a Wimpy Kid series and the Awesome Friendly Kid series. He is a six-time Nickelodeon Kids’ Choice Award winner for Favorite Book and has been named one of Time magazine’s 100 Most Influential People in the World. He spent his childhood in the Washington, D.C., area and moved to New England, where he and his wife own a bookstore named An Unlikely Story.