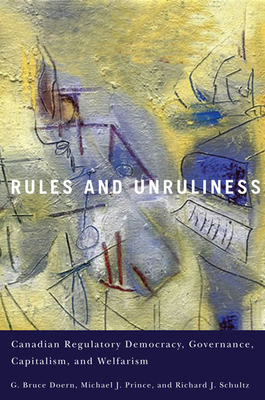 A critical examination of Canadian regulatory governance and politics over the past fifty years, Rules and Unruliness builds on the theory and practice of rule-making to show why government "unruliness" - the inability to form rules and implement structures for compliance - is endemic and increasing. Analyzing regulatory politics and governance in Canada from the beginning of Pierre Trudeau's era to Stephen Harper's government, the authors present a compelling argument that current regulation of the economy, business, and markets are no longer adequate to protect Canadians. They examine rules embedded in public spending programs and rules regarding political parties and parliamentary government. They also look at regulatory capitalism to elucidate how Canada and most other advanced economies can be characterized by co-governance and co-regulation between governments, corporations, and business interest groups. Bringing together literature on public policy, regulation, and democracy, Rules and Unruliness is the first major study to show how and why increasing unruliness affects not only the regulation of economic affairs, but also the social welfare state, law and order, parliamentary democracy, and the changing face of global capitalism.

“Rules and Unruliness is a remarkable achievement, synthesizing and building upon the exceptional insights of three leading authorities on regulation and public governance in Canada.” Janine Brodie, Department of Political Science, University of Alberta