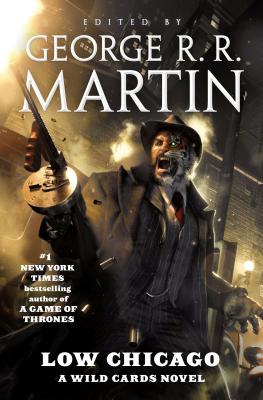 This is book number 20 in the Wild Cards series.

In Low Chicago, a gang of criminals scattered throughout the past threaten the stability of the world in George R. R. Martin's latest Wild Cards adventure.

But after a superpowered mishap, the most high-profile criminals in the city are scattered throughout the past and their schemes across time threaten the stability of the world.

Perfect for current fans and new readers alike, Low Chicago is an all-new time travel adventure that highlights the criminal underworld of 1920s Chicago, featuring a fresh cast of characters from the Wild Cards universe.

“Martin has assembled an impressive array of writers. . . . Progressing through the decades, Wild Cards keeps its momentum.”—Locus

Now in development for TV: Rights to develop Wild Cards have been acquired by Universal Cable Productions, the team behind The Magicians and Mr. Robot, with the co-editor of Wild Cards, Melinda Snodgrass, as executive producer.

“Upbeat....Every chapter is solidly entertaining; standouts include Saladin Ahmed’s “Meathooks on Ice,” Christopher Rowe’s “The Apotheosis of Todd Taszycki,” and Mary Anne Mohanraj’s “A Beautiful Facade,” all of which allow their protagonists plenty of room for growth and change. Longtime fans will enjoy surprise appearances by previous notables, sometimes in drastically altered circumstances, and this entry also works well as a standalone. It’s a treat for any fan of superhero stories.” —Publishers Weekly

“Humor is a nice touch throughout…The stories are all solid and entertainingly deal with the various time paradoxes. Low Chicago is a good entry point for those new to Wild Cards, a good read for those of us who are not immersed but have some general knowledge, and another treat for true Wild Cards fans.” —Locus magazine

“A genre-hopping, time-jumping, crowd-pleasing chain novel under the curation of old master Martin, he of Game of Thrones fame. The authors do a respectable job overall of tangling with the ineffable. Is it sci-fi? A viral thriller? Yes and no, and while not for every taste, a pleasure for the experimentally minded.” —Kirkus Review

“Bringing together a strong group of authors, ranging from long-time Wild Cards contributors Melinda Snodgrass, Kevin Andrew Murphy, and John Jos. Miller to fresh recruits Saladin Ahmed and Mary Anne Mohanraj, Low Chicago weaves a story that travels from the neat present to the troubled 1968 Democratic convention to 1920s gangland and even Chicago’s prehistoric past. The twenty-fifth Wild Cards novel should not only satisfy long-time fans of the series but also provide newcomers to it an engaging and exciting entry into its world.” —Booklist

"Martin has assembled an impressive array of writers. . . . Progressing through the decades, Wild Cards keeps its momentum to the end." —Locus

"The shared-world series known as Wild Cards has had a long and illustrious history of contributors and achievements." —SciFi.com

"New readers and fans of the long-running series will both love the fast-paced plotting and the ever-expanding history of the Wild Card virus on this alternate Earth, where even the superheroes are human." —Shelf Awareness on Lowball