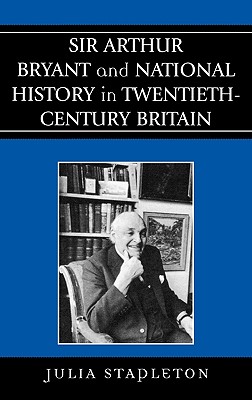 By Julia Stapleton
Email or call for price

Sir Arthur Bryant and National History in Twentieth-Century Britain is a significant new study of the work of the popular historian and journalist Sir Arthur Bryant (1899-1985). Since his death, scholarly interest in Bryant has focused on his Nazi sympathies in the late 1930s. Julia Stapleton broadens our understanding of the man and the writer. Stapleton illuminates Bryant's romantic ideal of his nation. She explores the historian's success in writing for a broad middlebrow audience, aided by his firsthand experience of two world wars; and she traces the decline of Bryant's authority beginning in the 1960s as the discipline of history diversified and new ties were forged between professional historians and popular readerships. Stapleton suggests that Bryant prefigured and sustained a form of nationalism that remained nascent within the British population (though not always its elites) deep into the twentieth century, as the Falklands episode and the recent resurgence of English national identity well illustrate. Twenty years after his death, when history has scaled new heights of popularity, a study of the historian whose work made perhaps the largest public impact in twentieth-century Britain could not be more timely.

Julia Stapleton is senior lecturer in politics at the University of Durham.