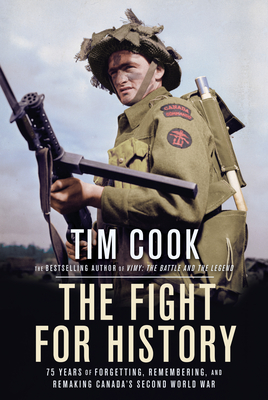 FINALIST for the 2021 Ottawa Book Awards

A masterful telling of the way World War Two has been remembered, forgotten, and remade by Canada over seventy-five years.

The Second World War shaped modern Canada. It led to the country's emergence as a middle power on the world stage; the rise of the welfare state; industrialization, urbanization, and population growth. After the war, Canada increasingly turned toward the United States in matters of trade, security, and popular culture, which then sparked a desire to strengthen Canadian nationalism from the threat of American hegemony.

The Fight for History examines how Canadians framed and reframed the war experience over time. Just as the importance of the battle of Vimy Ridge to Canadians rose, fell, and rose again over a 100-year period, the meaning of Canada's Second World War followed a similar pattern. But the Second World War's relevance to Canada led to conflict between veterans and others in society--more so than in the previous war--as well as a more rapid diminishment of its significance.

By the end of the 20th century, Canada's experiences in the war were largely framed as a series of disasters. Canadians seemed to want to talk only of the defeats at Hong Kong and Dieppe or the racially driven policy of the forced relocation of Japanese-Canadians. In the history books and media, there was little discussion of Canada's crucial role in the Battle of the Atlantic, the success of its armies in Italy and other parts of Europe, or the massive contribution of war materials made on the home front. No other victorious nation underwent this bizarre reframing of the war, remaking victories into defeats.

The Fight for History is about the efforts to restore a more balanced portrait of Canada's contribution in the global conflict. This is the story of how Canada has talked about the war in the past, how we tried to bury it, and how it was restored. This is the history of a constellation of changing ideas, with many historical twists and turns, and a series of fascinating actors and events.

TIM COOK is the Great War historian at the Canadian War Museum, as well as an adjunct professor at Carleton University. In 2008 he won the J.W. Dafoe Prize for At the Sharp End and again in 2018 for Vimy; Shock Troops won the 2009 Charles Taylor Prize for Literary Non-Fiction. In 2013, Cook received the Pierre Berton Award for popularizing Canadian history. He is a member of the Order of Canada.

“Cook [is] an indispensable war historian. . . .  By exploring how Canadians arrived, after so long, at new ways of understanding World War II, Cook shows that even the most calcified historical perspectives can ultimately prove pliable. Anyone fighting for a better grasp of history—whether it’s our constitutional roots, our colonial past, or our heroes and villains—should take heart.”
—Maclean's

“[Cook] provides some insight into what has been driving this passion for the past and its stories. . . . [W]hat Cook makes clear is that the fight for history and the shaping of social memory is a process that never stops. Against the forces of apathy and indifference we must push back.”
—Toronto Star

“. . . the influential Canadian military historian Tim Cook . . . has taken up the torch from Jack Granatstein and the late Desmond Morton as a new generation's pre-eminent voice in the field. . . . Cook's many strengths are again evident. He writes fluidly, with a sharp eye for detail and the telling anecdote. . . His descriptions of the mental challenges that soldiers faced after the war, drawn from letters, are heartbreaking. . . . After years of neglect, Cook concludes, the Second World War ‘has been waiting for us to return to it.’ As he explains so eloquently, it's an invitation we need to accept.”
—Policy Magazine