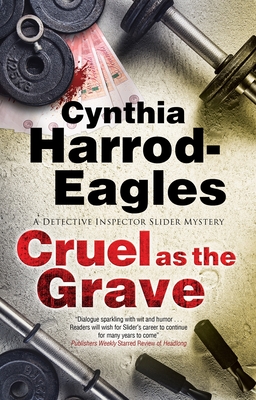 By Cynthia Harrod-Eagles
$28.99
Available to Order
(Due to distributor limitations, sales of this book are final - it cannot be returned to us.)

This is book number 22 in the Bill Slider Mystery series.

The murder of a personal fitness trainer draws DCI Bill Slider and his team into a baffling investigation where nothing is as it first appears. Fitness trainer Erik Lingoss is found dead in his west London flat, his head smashed by one of his own dumbbells. His heartlessly-dumped girlfriend, blood on her clothes and hands, is the prime suspect. She had means, opportunity, and motive. But is the case as clear-cut as it seems? Handsome Erik Lingoss had clients in high places; and he seemed to engender powerful emotions. If it was a crime of passion, there was plenty of that to go round: love strong as death, jealousy cruel as the grave. Who did he let in to his flat that evening? Where is his missing mobile phone? Why is seven hundred pounds in cash stuffed under his pillow? The deeper Slider and his team dig, the clearer it becomes there's far more to this case than meets the eye.

Cynthia Harrod-Eagles was born and educated in London and had a variety of jobs in the commercial world before becoming a full-time writer. She is the author of the internationally acclaimed Bill Slider mysteries and the historical Morland Dynasty series. She lives in London, is married with three children and enjoys music, wine, gardening, horses and the English countryside.