Where Wizards Stay Up Late: The Origins Of The Internet (Paperback) 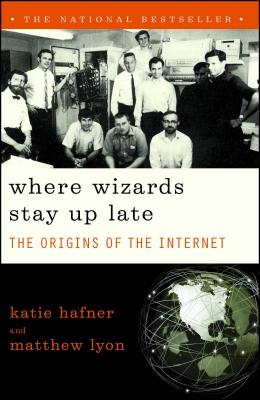 Twenty five years ago, it didn't exist. Today, twenty million people worldwide are surfing the Net. Where Wizards Stay Up Late is the exciting story of the pioneers responsible for creating the most talked about, most influential, and most far-reaching communications breakthrough since the invention of the telephone.
In the 1960's, when computers where regarded as mere giant calculators, J.C.R. Licklider at MIT saw them as the ultimate communications devices. With Defense Department funds, he and a band of visionary computer whizzes began work on a nationwide, interlocking network of computers. Taking readers behind the scenes, Where Wizards Stay Up Late captures the hard work, genius, and happy accidents of their daring, stunningly successful venture.

Katie Hafner is a technology correspondent at Newsweek and coauthor of Cyberpunk: Outlaws and Hackers on the Computer Frontier. Matthew Lyon and Katie Hafner are married and live in the San Francisco Bay area.

David Plotnikoff San Jose Mercury News The book, almost certainly destined to be the definitive work on the birth and early years of the Internet, is sweeping in scope....Whoever chooses to write the next chapter in the saga...has a tough act to follow.

Lars Eighner The Texas Observer In all the dreck and dross of Internet books, here is a brilliant gem...remarkably well written.

Mark Baechtel The Washington Post Excellent...makes for crackling entertainment...reawakens a sense of wonder in readers jaded by too much Internet hype.

Richard Bernstein The New York Times Book Review If you always wanted to know who put the 'at' sign in your E-mail address, then Where Wizards Stay Up Late is the book for you.