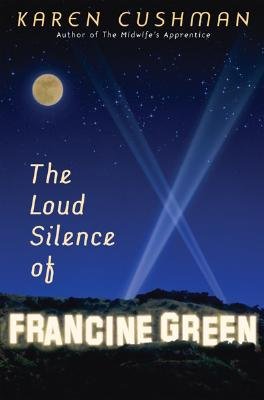 Francine Green doesn’t speak up much, and who can blame her? Her parents aren’t interested in her opinions, the nuns at school punish girls who ask too many questions, and the House Committee on Un-American Activities is blacklisting people who express unpopular ideas. There’s safety in silence. Francine would rather lose herself in a book, or in daydreams about her favorite Hollywood stars, than risk attracting attention or getting in trouble.

But when outspoken, passionate Sophie Bowman transfers into Francine’s class at All Saints School for Girls, Francine finds herself thinking about things that never concerned her before—free speech, the atom bomb, the existence of God, the way people treat each other. Eventually, Francine discovers that she not only has something to say, she is absolutely determined to say it.

Once again, Karen Cushman follows a young woman’s progress toward her true self, this time exploring the nature of friendship and the experience of growing up Catholic in an era that is both fascinating and relevant to today’s young people. Author’s note.

Karen Cushman's acclaimed historical novels include Catherine, Called Birdy, a Newbery Honor winner, and The Midwife's Apprentice, which received the Newbery Medal. She lives on Vashon Island in Washington State. Visit her online at karencushman.com and on Twitter @cushmanbooks.

"Cushman creates another introspective female character who is planted firmly in her time and who grows in courage [and] self-awareness." School Library Journal, Starred

"The dialogue is sharp...[in] this story of friends and foes, guilt and courage." (Starred Review) Kirkus Reviews, Starred

"A compelling look at what can happen when one girl finds the courage to speak out for what she believes." Bookpage

"Serious issues are balanced by Francine's self-deprecating sense of humor...to produce a wonderful snapshot of the times." VOYA (Voice of Youth Advocates)

"Cushman has the gift of making the past immediate...this time the connections to the present seem particularly apropos." Horn Book