Too Many Cooks/Champagne for One (Nero Wolfe) (Paperback) 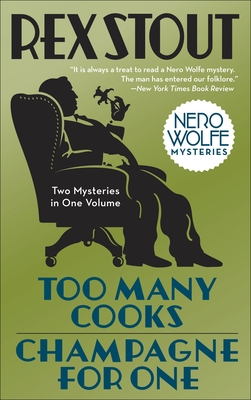 
A grand master of the form, Rex Stout is one of America’s greatest mystery writers, and his literary creation Nero Wolfe is one of fiction’s greatest detectives. In this pair of classic Nero Wolfe mysteries, Stout is at his unparalleled best as the arrogant, gourmandizing, sedentary sleuth and his trusty man-about-town, Archie Goodwin, are served two lethally appetizing cases.

Too Many Cooks
Everyone knows that too many cooks spoil the broth, but you’d hardly expect it to lead to murder. But that’s exactly what’s on the menu at a five-star gathering of the world’s greatest chefs. As guest of honor, Wolfe was lured from his brownstone to a posh southern spa to deliver the keynote address. He never expected that between courses of haute cuisine he and Archie would be compelled to detect a killer with a poison touch—a killer preparing to serve the great detective his last supper.

Champgne for One
Faith Usher talked about taking her own life and even kept cyanide in her purse. So when she died from a lethal champagne cocktail in the middle of a high society dinner party, everyone called it suicide—including the police. But Nero Wolfe isn’t convinced—and neither is Archie. Especially when Wolfe is warned by four men against taking the case. Deception, blackmail, and a killer who may have pulled off the perfect crime…it’s a challenge Nero Wolfe can’t resist.

"It is always a treat to read a Nero Wolfe mystery. The man has entered our folklore...Like Sherlock Holmes...he looms larger than life and, in some ways, is much more satisfactory." — New York Times Book Review