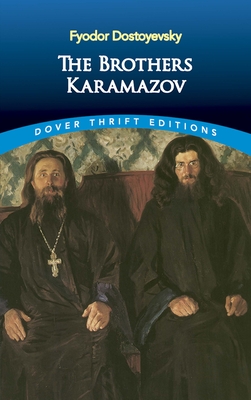 Completed only a few months before the author's death, The Brothers Karamazov is Dostoyevsky's largest, most expansive, most life-embracing work. Filled with human passions ― lust, greed, love, jealousy, sorrow, and humor ― the book is also infused with moral issues and the issue of collective guilt.
As in many of Dostoyevsky's novels, the plot centers on a murder. Three brothers, different in character but bound by their ancestry, are drawn into the crime's vortex: Dmitri, a young officer utterly unrestrained in love, hatred, jealousy, and generosity; Ivan, an intellectual capable of delivering impromptu disquisitions about good and evil, God, and the devil; and Alyosha, the youngest brother, preternaturally patient, kind, and loving. Part mystery, part profound philosophical and theological debate, The Brothers Karamazov represents the culmination of Dostoyevsky's life's work and ranks among the greatest novels of all time.

With his sympathetic portrayals of the downtrodden of 19th-century Russian society, Fyodor Dostoyevsky (1821-1881) exercised immense influence on modern writers. His novels featured profound philosophical and psychological insights that anticipated the development of psychoanalysis and existentialism.