The Half Has Never Been Told: Slavery and the Making of American Capitalism (Hardcover) 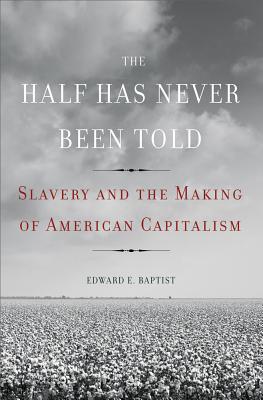 By Edward E. Baptist
Email or call for price.
Not Available from Us

Americans tend to cast slavery as a pre-modern institution -- the nation's original sin, perhaps, but isolated in time and divorced from America's later success. But to do so robs the millions who suffered in bondage of their full legacy. As historian Edward E. Baptist reveals in The Half Has Never Been Told, the expansion of slavery in the first eight decades after American independence drove the evolution and modernization of the United States. In the span of a single lifetime, the South grew from a narrow coastal strip of worn-out tobacco plantations to a continental cotton empire, and the United States grew into a modern, industrial, and capitalist economy.

Told through intimate slave narratives, plantation records, newspapers, and the words of politicians, entrepreneurs, and escaped slaves, The Half Has Never Been Told offers a radical new interpretation of American history.

Edward E. Baptist is an professor of history at Cornell University. Author of the award-winning Creating an Old South, he lives in Ithaca, New York.

Wall Street Journal
“Abolitionists were contemptuous of such self-serving nonsense, but they too tended to see slavery as an economically inefficient, and morally reprehensible, hangover from the premodern past… In The Half Has Never Been Told, Edward E. Baptist takes passionate issue with such assumptions. He asserts that slavery was neither inherently inefficient nor a counterpoint to capitalism. Rather, he says, it was woven inextricably into the transnational fabric of early 19th-century capitalism…Baptist writes with verve and a good eye for the dramatic.”

New York Times Book Review
“Baptist's work is a valuable addition to the growing literature on slavery and American development…Baptist has a knack for explaining complex financial matters in lucid prose…[The Half Has Never Been Told's] underlying argument is persuasive.”

Times Literary Supplement
“A book unusual, even courageous, for its enormous ambition and admirable breadth…Baptist's book is among the best single-volume studies of the relationship between the expansion of slavery and the political economy of the United States…The Half Has Never Been Told has offered the historical backdrop for the stirring declaration ‘black lives matter.'”

Choice
“In addition to smashing paradigms about antebellum slavery, the book features evocative explorations of how African Americans developed a common culture despite the individual and family devastation inflicted by ‘enslavers.' In the final chapters, the author offers a useful interpretation of how sectional conflict emerged and intensified after 1840 despite a half-century of shared support for cotton slavery. The book gained wide notice after a hail of mocking tweets forced The Economist to withdraw an anonymous review, but it should gain fame for its trailblazing substance and style.”

Seattle Times
“[Baptist] presents a detailed case, showing how the American economy benefitted from profits gained by forced labor and financial instruments that enabled investors to profit from slavery.”

Huffington Post Black Voices blog
“Quite a gripping read. Baptist weaves deftly between analysis of economic data and narrative prose to paint a picture of American slavery that is pretty different from what you may have learned in high school Social Studies class.”

Christian Century
“Edward Baptist has written one of the richest and most provocative accounts of American slavery I have ever read. He so powerfully captures the pain and tragedy of plantation slavery… The author brilliantly draws out the close relationship between plantation slavery in the newly opening territories and states of what was then called the Southwest (Kentucky, Ala¬bama, Mississippi, Tennessee, and Texas) and the American capitalist explosion of the antebellum years.”

North Carolina's News & Observer
“A stunning indictment of African-American slavery, contextualizing the history of the “peculiar institution” within emerging 19th-century American capitalism…Baptist's great contribution is in providing general readers with insights into slavery's horrors and how it transformed the South into the dominant force in the global market and cotton into the most important raw material in the world economy.”

CounterPunch
“Edward E. Baptist's brilliant book, The Half Has Never Been Told, soars because of the author's decision to root his analysis in the human dimension. The book transcends anything that has previously been written about slavery...In short, Baptist has humanized the lives of American slaves, liberated them from one of the most inhumane systems mankind ever devised. The entire country needs to do the same.”

Kirkus
“A substantial new history—possibly the most important work on slavery in a generation.”

Booklist, starred review
“Baptist renders history and economics with the power of prose that seeks to tell a fuller story than has been told of American slavery…An insightful look at U.S. slavery and its controversial role in the much-celebrated story of American capitalism.”

Library Journal, starred review
“Baptist has written a book that truly deepens and broadens our understanding of slavery… Professional historians and lay readers will pore over this book for years to come. Essential for all readers interested in American history and the history of slavery.”

Los Angeles Times
“An ambitious new economic and social history of antebellum America…The overwhelming power of the stories that Baptist recounts and the plantation-level statistics he's compiled give his book the power of truth and revelation….The Half Has Never Been Told is a fresh… take on a history we thought we knew too well — the history of a people who were victimized by a medieval brand of capitalism but survived...Baptist adds many new, stark and essential elements to that story. His most important achievement is to show us how the ‘dismal science' of economics served to make the lot of slaves even grimmer.”

New York Times, Vikas Bajaj
“New books like Empire of Cotton and The Half Has Never Been Told: Slavery and the Making of American Capitalism by Edward Baptist offer gripping and more nuanced stories of economic history.”

Nation
“Wonderful… Baptist provides meticulous, extensive and comprehensive evidence that capitalism and the wealth it created was absolutely dependent on the forced labor of Africans and African-Americans, downplaying culturalist arguments for Western prosperity.”

Publishers Weekly
“An unapologetic, damning, and grisly account of slavery's foundational place in the emergence of America as a global superpower, balancing the macro lens of statistics and national trends with intimate slave narratives. Delivered in a voice that fluidly incorporates both academic objectivity and coarse language… Baptist's chronicle exposes the taint of blood in virtually all of the wealth that Americans have inherited from their forebears, making it a rewarding read for anyone interested in U.S.A.'s dark history.”

Kirkus, starred review
“A…myth-busting work that pursues how the world profited from American slavery.... This is a complicated story involving staggering scholarship that adds greatly to our understanding of the history of the United States.”

Edward Ball, author of Slaves in the Family
“This book reveals a dirty secret about American business, and how commerce first boomed before the Civil War. Baptist unearths a big, nasty story: in the North and the South, slavery was the tainted fuel that kindled the fires of U.S. capitalism and made the country grow.”

Salon
Baptist's real achievement is to ground these financial abstractions in the lives of ordinary people. In vivid passages, he describes the sights, smells and suffering of slavery. He writes about individual families torn apart by global markets. Above all, Baptist sets out to show how America's rise to power is inextricable from the suffering of black slaves.

Washington Independent Review of Books
“Edward Baptist's The Half Has Never Been Told is an achievement of the first order… With Baptist's meticulous research and comprehensive, chronological approach, the other half of the story has now been told, and told very well. The reader is readily engaged in this scholarly treatment of over 400 pages, thanks to Baptist's narrative style and his skillful interweaving of personal stories from slave and enslaver memoirs and letters with complex political and economic context… Baptist's depiction of the breakup of families, slave coffles in chains, and relentless field toil is heartbreakingly affective and never allows us to forget that it is ultimately impossible to make property of people… This book on ‘slavery's second life in the United States' is highly recommended to those who want to understand the evolution of our African-American heritage and its centrality to the nation's political and economic history, not to mention the shameful blow to America's stated ideals.”

Daily Beast Best Nonfiction Books of 2014
“The real takeaway from this thoughtful, unsettling history: Baptist turns the long-accepted argument that slavery was economically inefficient on its head, and argues that it was an integral part of America's economic rise.”

Bloomberg View Top Ten Nonfiction Books of 2014
“In this assiduously researched and tightly argued volume, Baptist gives us what is by far the finest account of the deep interplay of the slave trade (especially within the nation's borders) and the development of the U.S. economy.”

Providence Journal Best Books of 2014
“Baptist's exhaustively researched, elegantly written and provocatively argued book details the connection between the growth of the institution of human bondage and economic innovations from 1783-1861.”

Guardian Australia Best Books of 2014
“A compelling case for recognizing slavery as fundamental to the rise of the United States.”