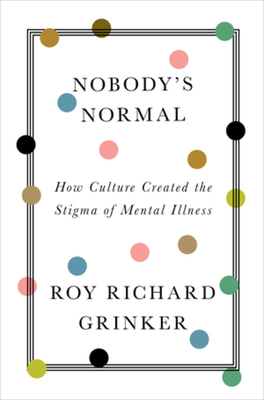 A compassionate and captivating examination of evolving attitudes toward mental illness throughout history and the fight to end the stigma.

For centuries, scientists and society cast moral judgments on anyone deemed mentally ill, confining many to asylums. In Nobody’s Normal, anthropologist Roy Richard Grinker chronicles the progress and setbacks in the struggle against mental-illness stigma—from the eighteenth century, through America’s major wars, and into today’s high-tech economy.

Nobody’s Normal argues that stigma is a social process that can be explained through cultural history, a process that began the moment we defined mental illness, that we learn from within our communities, and that we ultimately have the power to change. Though the legacies of shame and secrecy are still with us today, Grinker writes that we are at the cusp of ending the marginalization of the mentally ill. In the twenty-first century, mental illnesses are fast becoming a more accepted and visible part of human diversity.

Grinker infuses the book with the personal history of his family’s four generations of involvement in psychiatry, including his grandfather’s analysis with Sigmund Freud, his own daughter’s experience with autism, and culminating in his research on neurodiversity. Drawing on cutting-edge science, historical archives, and cross-cultural research in Africa and Asia, Grinker takes readers on an international journey to discover the origins of, and variances in, our cultural response to neurodiversity.

Urgent, eye-opening, and ultimately hopeful, Nobody’s Normal explains how we are transforming mental illness and offers a path to end the shadow of stigma.

Roy Richard Grinker is professor of anthropology and international affairs at the George Washington University. He is the author of several books, including Unstrange Minds: Remapping the World of Autism. He lives in Washington, DC.

A rich history woven with insights from four generations of the Grinker family’s research, Nobody's Normal shows how a society’s needs and prejudices shape how it deals with mental illness... This book sings with [Grinker's] empathetic and authoritative voice.

An unusually engaging history of mental illness and the stigma attached to it. Roy Richard Grinker threads together the attitudes of society toward psychiatric illness with the lives and work of his ancestors and his daughter’s experience of autism. The result is an informative and thoughtful book about mental illness: common, painful, usually treatable, and profoundly tied to the human condition.
— Kay Redfield Jamison, Pulitzer Prize finalist for Robert Lowell, Setting the River on Fire

This landmark book could not be more timely, coming at the pivotal moment when our society is reevaluating its most basic assumptions about mental illness and health…[A] must-read for anyone interested in psychology, anthropology, the social model of disability, or the complex nature of being human. Nobody’s Normal is a masterpiece.

— Steve Silberman, author of NeuroTribes: The Legacy of Autism and the Future of Neurodiversity

In Nobody's Normal, Roy Richard Grinker explores the way stigma has coalesced around mental illness and assesses the cumulative harm done by depressed or psychotic patients’ sense of humiliation…This engaging book is an able guide to how the problem might begin to be addressed, so that those who are ill bear only the burden of their illness itself.

The most important work on stigma in more than half a century. It tells two intertwined stories—a meticulous, comparative history of mental illness from the Enlightenment to the present, highlighting the centrality of military medicine in times of war; and the story of [the author’s] own family…Roy Richard Grinker brilliantly unravels the tension between deviance and vulnerability by shaping the relationship between multiple generations.”
— Sander L. Gilman, author of Seeing the Insane

An agile history... A highly readable, thoughtful study of how we perceive and talk about mental illness—with luck, evermore respectfully.
— Kirkus Reviews

Impactful... This book will fascinate anyone drawn to the subjects of mental illness, psychology and psychiatry.
— Publishers Weekly