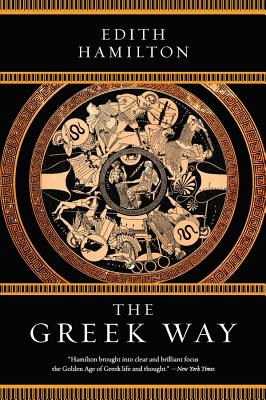 Edith Hamilton buoyantly captures the spirit and achievements of the Greek civilization for our modern world.

In The Greek Way, Edith Hamilton captures with "Homeric power and simplicity" (New York Times) the spirit of the golden age of Greece in the fifth century BC, the time of its highest achievements. She explores the Greek aesthetics of sculpture and writing and the lack of ornamentation in both. She examines the works of Homer, Pindar, Aeschylus, Sophocles, Aristophanes, and Euripides, among others; the philosophy of Socrates and Plato’s role in preserving it; the historical accounts by Herodotus and Thucydides on the Greek wars with Persia and Sparta and by Xenophon on civilized living.

Edith Hamilton (1867–1963) was made an honorary citizen of Athens because of her writings. She won the National Achievement Award and received honorary degrees from Yale University, the University of Rochester, and the University of Pennsylvania. The author of The Roman Way, Mythology, and other works, she was a member of the American Academy of Arts and Letters.

Hamilton is at her best describing the tragic sensibility, the strange mixture of doom and exaltation that marks Greek drama. It was based on the conviction that good grows out of bad, virtue out of hardship, and that wisdom is born in suffering.
— David Brooks

[The Greek Way] distills the essence of classical Greece for the general reader.