Gay Bar: Why We Went Out (Hardcover) 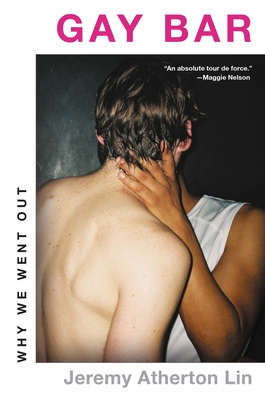 Strobing lights and dark rooms; throbbing house and drag queens on counters; first kisses, last call: the gay bar has long been a place of solidarity and sexual expression—whatever your scene, whoever you’re seeking. But in urban centers around the world, they are closing, a cultural demolition that has Jeremy Atherton Lin wondering: What was the gay bar? How have they shaped him? And could this spell the end of gay identity as we know it?

In Gay Bar, the author embarks upon a transatlantic tour of the hangouts that marked his life, with each club, pub, and dive revealing itself to be a palimpsest of queer history. In prose as exuberant as a hit of poppers and dazzling as a disco ball, he time-travels from Hollywood nights in the 1970s to a warren of cruising tunnels built beneath London in the 1770s; from chichi bars in the aftermath of AIDS to today’s fluid queer spaces; through glory holes, into Crisco-slicked dungeons and down San Francisco alleys. He charts police raids and riots, posing and passing out—and a chance encounter one restless night that would change his life forever.

The journey that emerges is a stylish and nuanced inquiry into the connection between place and identity—a tale of liberation, but one that invites us to go beyond the simplified Stonewall mythology and enter lesser-known battlefields in the struggle to carve out a territory. Elegiac, randy, and sparkling with wry wit, Gay Bar is at once a serious critical inquiry, a love story and an epic night out to remember.

Jeremy Atherton Lin was raised in California and now lives in London, where he studied writing at the Royal College of Art. Jeremy’s work has been published in the White Review, Tinted Window and the Times Literary Supplement, and he has been short-listed for the Fitzcarraldo Editions Essay Prize. He is an editor at Failed States, a journal of art and writing on place.

“A remarkable debut. . . it’s a difficult book to pin down, but that’s what makes it so readable and so endlessly fascinating. . . Each observation is sharp and phrased beautifully; Atherton Lin wastes no words, and the ones he chooses are carefully considered. Gay Bar is a book that’s beyond impressive, and Atherton Lin’s writing is both extremely intelligent and refreshingly unpretentious.”
—NPR

"The treatment of time in the book — the way the present is peeled back to reveal the past — is beautiful, and original. Throughout there is a feeling of simultaneity, of queer lives and histories moving in parallel, of nightlife as a site of pleasure, play and resistance…How movingly he replicates it here, with his wide, strobing intellect, enlivening skepticism, rascally allure.”
—Parul Sehgal, NEW YORK TIMES

“A beautiful amble through the world of gay bars . . . a rich tapestry of history, theory, and criticism.”
—VANITY FAIR

“Brilliantly written . . . Atherton Lin writes as though he himself is a sign of the times. With gusto and a sense of abandon he describes his own hunger for excitement, with scenes that are gloriously locked in the present moment.”
—Colm Tóibín, THE GUARDIAN

“I can’t remember the last time I’ve been so happily surprised and enchanted by a book. Gay Bar is an absolute tour de force.”—MAGGIE NELSON

“Jeremy Atherton Lin's personal history of queer nightlife is shot with vibrant intellectual adrenaline. With keen original insight, he celebrates the gay bar as a site of ribald, sensuous, and urgent resistance. A must-read for all.”—CATHY PARK HONG, author of MINOR FEELINGS

“Lively and dirty, intellectual and gossipy, Gay Bar is the rare book that feels both like a guilty pleasure and like it is making you considerably smarter as you read. A super-exciting debut and an important document of queer lives.”—MICHELLE TEA, author of BLACK WAVE and AGAINST MEMOIR

“Masterful…[Gay Bar] has something for every reader…This superb, multifaceted book takes a close look at gay bars individually and as concept, in history and in the author's life, tackling big questions with wisdom and grace.”
—SHELF AWARENESS

“A kinetic bar crawl through space and time and subculture. . . . Gay Bar  feels like a love letter, and of the realest sort — one that expresses devotion through piercing, sustained attention, that takes delight in negotiating.”
—BUZZFEED