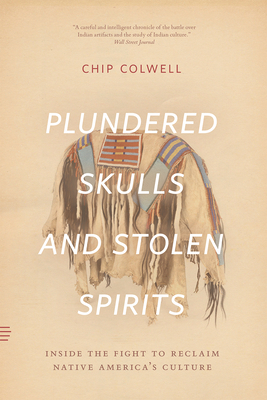 By Chip Colwell
$19.00
Available to Order

Who owns the past and the objects that physically connect us to history? And who has the right to decide this ownership, particularly when the objects are sacred or, in the case of skeletal remains, human? Is it the museums that care for the objects or the communities whose ancestors made them? These questions are at the heart of Plundered Skulls and Stolen Spirits, an unflinching insider account by a leading curator who has spent years learning how to balance these controversial considerations.

Five decades ago, Native American leaders launched a crusade to force museums to return their sacred objects and allow them to rebury their kin. Today, hundreds of tribes use the Native American Graves Protection and Repatriation Act to help them recover their looted heritage from museums across the country. As senior curator of anthropology at the Denver Museum of Nature & Science, Chip Colwell has navigated firsthand the questions of how to weigh the religious freedom of Native Americans against the academic freedom of scientists and whether the emptying of museum shelves elevates human rights or destroys a common heritage. This book offers his personal account of the process of repatriation, following the trail of four objects as they were created, collected, and ultimately returned to their sources: a sculpture that is a living god, the scalp of a massacre victim, a ceremonial blanket, and a skeleton from a tribe considered by some to be extinct. These specific stories reveal a dramatic process that involves not merely obeying the law, but negotiating the blurry lines between identity and morality, spirituality and politics.

Things, like people, have biographies. Repatriation, Colwell argues, is a difficult but vitally important way for museums and tribes to acknowledge that fact—and heal the wounds of the past while creating a respectful approach to caring for these rich artifacts of history.

Chip Colwell is the senior curator of anthropology at the Denver Museum of Nature & Science. His work has been highlighted in such venues as the New York Times, Denver Post,  Huffington Post, and C-SPAN, and his books include Living Histories: Native Americans and Southwestern Archaeology and Inheriting the Past: The Making of Arthur C. Parker and Indigenous Archaeology.

"This powerful book will be of particular importance to those working in museum and tribal settings, but is highly appropriate for anyone interested in cultural heritage and the legal efforts to manage claims for Native patrimony. Essential."
— Choice

"Plundered Skulls and Stolen Spirits is a sobering peek into the controversy that surrounds tribal artifacts and human remains found in museums throughout the United States. His eloquent narration details several unique cases of repatriation. . . . Colwell has a unique perspective. He provides the reader with a firsthand look at the repatriation process, sympathetically including tribal perspectives--something that few museum directors have sought to do when writing on this subject in the past."
— Science

“Plundered Skulls and Stolen Spirits uses the story of one museum to show how Native American symbols of identity and ceremony and ancestral bones were initially appropriated as objects of cultural patrimony, but recently have become part of a complicated struggle of ownership. As Colwell profoundly shows, the emotional price paid by everyone involved—Native American, archaeologist, and museum curator—is never small.”

— Larry J. Zimmerman, author of The Sacred Wisdom of the Native Americans

"Colwell ably and sensitively tells the often conflict-ridden story of how and why museums in the US relinquished their hold over this material. . . . Colwell finds himself squarely in the middle of each quandary: a practising anthropologist who works alongside Native Americans every day and is sensitive to their cultural dynamics. Colwell’s account favours the Native American perspective--a sensible approach for a book aimed at scientifically literate readers who may lean the other way. Readers will come away with a deeper appreciation of Native American cultural imperatives and the complexity of the situation."
— New Scientist

"A lightly written, insider's account of the battle over human remains and objects in museums. . . . As this book shows, the fight to reclaim Native America’s culture has been waged, in significant parts, by professionals such as Colwell. His is indeed an insider’s account--just not from the sidelines. He too has been on the battlefield."

“A careful and intelligent chronicle of the battle over Indian artifacts and the study of Indian culture.”
— Wall Street Journal

“Colwell, senior curator of anthropology at the Denver Museum of Nature & Science, explores the fraught project of repatriating Native American sacred objects in this moving and thoughtful work. . . . Colwell’s book raises provocative questions about who owns the past, and is surely an important work for curators—or anyone—interested in America’s treatment of its cultural legacy.”
— Publishers Weekly

"Without ever descending into sensationalistic tones, the author exposes delicate facts about massacres, beliefs, desecrations, and illegal activities, deploying evidence with a measured distance that is difficult to argue against. Native American voices are given plenty of space to support their cases. They emerge as strong and determined and this is what the author wants us to perceive as a way to sensitise the public to the deep ethical implications that these, like many other cases, present us with. . . [Colwell] explicitly make[s] the theme of objects’ agency and personhood the core of [his] most poignant arguments about repatriation, ethics, and conservation."
— Transmotion

“Plundered Skulls and Stolen Spirits breaks new ground. Colwell’s dual roles of museum curator and human rights advocate offers a narrative of personal growth and professional practice that couples a humanist’s sensitivities with a historian’s insistence on primary documentary sources. The resulting breath of fresh air contributes mightily to still-controversial conversations about American reburial and repatriation. The message sounds loud and clear: Twenty-first century museums can indeed stand tall in addressing their own complex histories. Why do some still feel obliged to cover up past performance, to lock out qualified researchers from their archives and to sugar-coat their past in the hopes that nobody will notice?”

“In this beautifully written meditation on the vexed relationship between museums and Native American communities, Colwell reveals as never before the human dimensions of our recent struggles over repatriation. Important, necessary reading for all those who grapple with the essential question of how best to respect and honor the past.”
— Karl Jacoby, author of Shadows at Dawn: An Apache Massacre and the Violence of History