Exit from Hegemony: The Unraveling of the American Global Order (Hardcover) 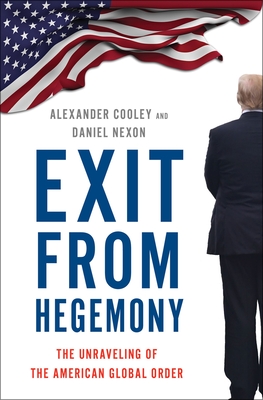 By Alexander Cooley, Daniel Nexon
Not Available from Us

We live in a period of great uncertainty about the fate of America's global leadership. Many believe that Donald Trump's presidency marks the end of liberal international order-the very system of global institutions, rules, and values that shaped the American international system since the end of World War II. Trump's repeated rejection of liberal order, criticisms of long-term allies of the US, and affinity for authoritarian leaders certainly undermines the American international system, but the truth is that liberal international order has been quietly eroding for at least 15 years. In Exit from Hegemony, Alexander Cooley and Daniel Nexon develop a new, integrated approach to understanding the rise and decline of hegemonic orders. Their approach identifies three distinct ways in which the liberal international order is undergoing fundamental transformation. First, Russia and China have targeted the order, positioning themselves as revisionist powers by establishing alternative regional institutions and pushing counter-norms. Second, weaker states are hollowing out the order by seeking patronage and security partnership from nations outside of the order, such as Saudi Arabia and China. Even though they do not always seek to disrupt American hegemony, these new patron-client relationships lack the same liberal political and economic conditions as those involving the United States and its democratic allies. Third, a new series of transnational networks emphasizing illiberalism, nationalism, and right-wing values increasing challenges the anti-authoritarian, progressive transnational networks of the 1990s. These three pathways erode the primacy of the liberal international order from above, laterally, and from below. The Trump administration, with its America First doctrine, accelerates all three processes, critically lessening America's position as a world power.

Alexander Cooley is Director of Columbia University's Harriman Institute for the study of Russia, Eurasia and Eastern Europe and the Claire Tow Professor of Political Science at Barnard College of Columbia University. His books include Great Games, Local Rules: The New Great Power Contest in CentralAsia (Oxford), Ranking the World: Grading States as a Tool of Global Governance, and Dictators without Borders: Power and Money in Central Asia. In addition to his academic work, Professor Cooley serves on a range of international advisory bodies and working groups engaged with the region and hastestified for Congressional committees on Eurasian issues. Daniel Nexon is an Associate Professor in the Department of Government and the School of Foreign Service at Georgetown University. He has held fellowships from Stanford University's Center for International Security, Cooperation and at the Ohio State University's Mershon Center for InternationalStudies. From 2009-2010, he was a Council on Foreign Relations International Affairs Fellow in the US Department of Defense. In 2016, he helped coordinate the unofficial foreign-policy group for the Bernie Sanders campaign, and he remains active in efforts to forge progressive foreign policyprinciples. He is the author of The Struggle for Power in Early Modern Europe: Religious Conflict, Dynastic Empires, and International Change. He founded, and used to blog, at The Duck of Minerva. He currently blogs at Lawyers, Guns and Money.