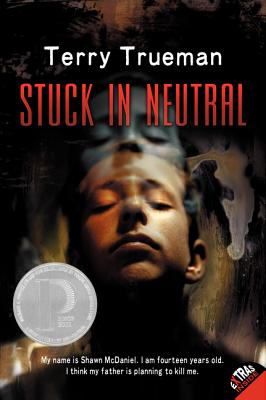 This is book number 1 in the Stuck in Neutral series.

This "intense reading experience"* is a Printz Honor Book.

Shawn McDaniel's life is not what it may seem to anyone looking at him. He is glued to his wheelchair, unable to voluntarily move a muscle—he can't even move his eyes. For all Shawn's father knows, his son may be suffering. Shawn may want a release. And as long as he is unable to communicate his true feelings to his father, Shawn's life is in danger.

To the world, Shawn's senses seem dead. Within these pages, however, we meet a side of him that no one else has seen—a spirit that is rich beyond imagining, breathing life.

The paperback features an Extras section, giving readers even more insight into Shawn's life, and a Q&A with Terry Trueman.

Terry is also the author of Stuck in Neutral and its companion novel, Cruise Control; Hurricane; 7 Days at the Hot Corner; No Right Turn; and Inside Out.